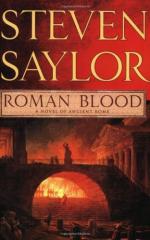 Steven Saylor
This Study Guide consists of approximately 38 pages of chapter summaries, quotes, character analysis, themes, and more - everything you need to sharpen your knowledge of Roman Blood.

This detailed literature summary also contains Topics for Discussion and a Free Quiz on Roman Blood by Steven Saylor.

Marcus Tullius Cicero, a fledgling advocate in Rome, sends his slave Tiro to the home of Gordianus the Finder in chapter one of Steven Saylor's historical murder mystery Roman Blood. Cicero retains Gordianus to help solve a mystery. Cicero's client Sextus Roscius (filius) is accused of killing his father, a wealthy landowner. There are conflicting stories circulating about the reasons for the murder of Sextus Roscius (pater), and it is Gordianus's responsibility to untangle the details before the murder trial.

Gordianus, who is neither of high nor low birth, is well aware of the rigid class system which exists in Rome, but as a result of his tenacity and Cicero's connections in high Roman society, Gordianus finds a way to ferret out the truth. Through his business relationship with Cicero, Gordianus makes the acquaintance of a young nobleman named Marcus Valerius Messalla, called Rufus because of his red hair. Gordianus is also introduced to Caecilia Metella, an eccentric member of Rome's ruling elite. Metella is the former lover of Sextus Roscius (pater). Sextus Roscius (filius) is under house arrest in Caecilia's home and his wife and two daughters live with him. Sextus Roscius (filius) is said to have plotted his father's death out of greed and jealousy. Before his murder, Sextus Roscius (pater) threatened to disinherit his son in favor of the unborn child of a prostitute named Elena. The older man had supposedly fallen in love with Elena. Sextus Roscius (pater) also blamed his son for the death of his younger son, Gaius.

Gordianus comes in contact with all strata of Roman society in his pursuit of the truth. No stranger to the lower elements of Rome, he questions a prostitute at a brothel called the House of Swans and visits a young widow named Polia and her mute son, Eco, in their tenement apartment. After learning of the bad blood between Sextus Roscius (pater) and his cousins Magnus and Capito, Gordianus travels to Ameria, the seat of the Roscius family's thirteen farms. In the nearby community of Narnia, he meets and befriends a local farmer named Titus Megarus, who tells Gordianus a story which could help Sextus Roscius (filius) go free. However, the story could also serve to implicate Sulla, Rome's dictator, in the death of Sextus Roscius (pater). In the true fashion of detective fiction, it is not long before Gordianus's troubles begin. His house is vandalized, his slave Bethesda is attacked, and on more than one occasion, someone tries to kill him. The closer Gordianus comes to solving the murder of Sextus Roscius (pater), the more secrets are revealed. Those in power as well as those at the mercy of the powerful are revealed to be very similar, regardless of the trappings of their social position.

More summaries and resources for teaching or studying Roman Blood.