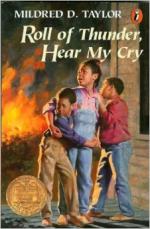 Mildred Taylor
This Study Guide consists of approximately 54 pages of chapter summaries, quotes, character analysis, themes, and more - everything you need to sharpen your knowledge of Roll of Thunder, Hear My Cry.

In the opening chapter, the white bus driver takes great glee in running the black children off the road, forcing them to jump into the weeds and briars on the shoulder. He laughs as he splashes them with mud. Why would a grown man do such a cruel thing to children? Why do the white children laugh when he does?

What are some of the differences between the black school and the white school?

There are many injustices in Cassie's town, including the Mississippi flag's flying higher than the...