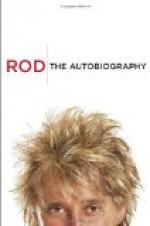 Rod Stewart
This Study Guide consists of approximately 44 pages of chapter summaries, quotes, character analysis, themes, and more - everything you need to sharpen your knowledge of Rod: The Autobiography.

This detailed literature summary also contains Topics for Discussion on Rod: The Autobiography by Rod Stewart.

Rod: The Autobiography is the life-story of rock singer and music legend, Rod Stewart. The book sheds light on his notorious womanizing, exposing his personal thoughts and opinions, and details his rise from working class Britain to international stardom.

The book begins with the near-death experience of Rod Stewart after a performance in the summer of 1995. The jet he was planning to take back home struck a bird after take-off, causing engine failure that prompted an emergency landing. The passengers, including Stewart, were unharmed, yet the experience was deeply unsettling for Stewart. Why had he been so lucky? Apart from dodging death in a fatal plane crash, the blessings of Rod Stewart include a successful career, seemingly endless wealth, and a large, loving family. Stewart realized that life can end suddenly and without warning and the story of life as extraordinary and fortunate as Rod Stewart's deserves to be told before it's too late.

Rod Stewart was born in north London in a heavily working class area. His father was a plumber and football enthusiast, and his mother was a homemaker. In his youth, Stewart drifted from one manual labor position to the next, unable to explore his passion for music and entertainment. Indeed, the area had little opportunity for socio-economic advancement, let alone an avenue for musical growth. Beyond these vices, however, the experience of living in North London ingrained a hard work ethic in Stewart. Earning an income builds character and responsibility. These are values that Stewart retains to this day and he even instructs his children under the same value system.

After a period of aimlessness, Stewart was luckily discovered by "Long" John Baldry of the Hoochie Coochie Men and signed onto his first professional singing position. They toured the country, traveling in a beat-up mini-van, filling night clubs with adoring fans, playing blues and rock 'n' roll seven nights a week, experimenting with drugs, and meeting women. It was during this time that Stewart toyed with the idea of developing his own solo career. His experience singing backing vocals in the Hoochie Coochie Men and later the Jeff Beck Group fostered a genuine love of the spotlight. He wanted to sing, and in fact, could sing quite well. Unfortunately, Stewart was a lousy writer, often struggling for days just to draft a few verses. His first two solo albums, An Old Raincoat Won't Ever Let You Down released in 1969 and Gasoline Alley in 1970 consisted largely of cover tracks. The albums received mediocre reviews. It wasn't until Stewart released the hit single "Maggie May" in 1971 when his career was radically transformed and he was catapulted into the world of rock-star celebrity.

Stewart was extraordinarily prolific early in his career from juggling a climbing solo career to touring with bands the Jeff Beck Group and the Faces, promoting his music, and raising a growing number of children. He produced fourteen solo albums between the years of 1970 and 1990 that included the much-loved hits "Mandolin Wind," "Do Ya Think I'm Sexy," "Blondes (Have More Fun)," and "Forever Young." However, his path toward musical greatness didn't go completely unblemished. Stewart struggled with drug abuse and addiction. At times, he felt that he simply could not perform without a few sniffs of cocaine or steroids to alleviate the inflammation in his already over-strained vocal cords. He also, perhaps infamously, drifted from one romantic relationship to the next, causing heartbreaks for many women. If he was inconvenienced by a partner, or was simply drawn to other women, the relationship would collapse.

In this regard, Rod: The Autobiography aggressively scrutinizes the personal life of Rod Stewart. It provides detailed accounts of his romantic life, especially his multiple relationships and marriages. The reader is introduced to Stewart as an exceptionally flirtatious boy seeking attention and intimacy from girls. In one revealing chapter, during a period of exploration and carefreeness for young Stewart, his first girlfriend became pregnant. Both were tremendously young and ill-equipped to care for the baby and therefore, the child was placed in the care of adoptive parents. Stewart quickly moved on from the entire affair, however.

Once he devoted his full energy and time to music, his appetite for sexual gratification reached fever pitch. While he was with the Faces, for example, he would often have sex with more than one woman a night. Stewart's collection of relationships meant his family was growing in size. Sarah, the girl given up for adoption was only Stewart's first child. Later, he conceived Kim and Sean Stewart with his first wife Alana Hamilton; Ruby with girlfriend Kelly Emberg; Renee and Liam Stewart with wife Rachel Hunter; and youngest Alastair and Aiden with his current wife, Penny Lancaster. Today, Stewart is perhaps the happiest he has ever been. After winning his first Grammy in 2004 for The Great American Songbook collection, Stewart's career is rebounding from sagging popularity in the 90s. He keeps himself active playing and watching British football, building model train sets, and spending his cash on art pieces and cars. His personal life has reached some stability as well. He is deeply in love with wife Penny Lancaster and his eight children have a profound loyalty to him and for one another. He loves his children dearly. Even amidst his personal struggles, Rod Stewart has generated a tremendously successful career and a strong, and loving family. In his own words, he is a "truly lucky" man.

More summaries and resources for teaching or studying Rod: The Autobiography.

Rod: The Autobiography from Gale. ©2005-2006 Thomson Gale, a part of the Thomson Corporation. All rights reserved.