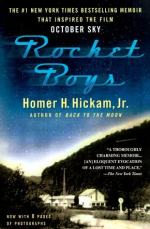 Homer Hickam
This Study Guide consists of approximately 50 pages of chapter summaries, quotes, character analysis, themes, and more - everything you need to sharpen your knowledge of Rocket Boys.

Homer "Sonny" Hickham Jr. grows up in Coalwood, a small town of 2000 people, hewn out of the West Virginia wilderness, a town built to extract bituminous coal from the earth beneath it. The second son of the coal mine superintendent Homer Hickham and his wife Elsie, Sonny, his parents and his brother, Bill, live a few hundred yards from the mine entrance. The kids from Coalwood grow up to enter the military or be miners. Sonny has no inspiration for a future outside of his home town until his life is changed in 1957. Sonny's imagination is captured when Sputnik, the first satellite put into orbit by the Russians, flies across the West Virginia sky. Fascination with stories of the desperate race by American scientists and engineers at Cape Canaveral, including rocket scientist Dr. Wernher von Braun, to catch up with the Russians, and an article on rocket mechanics in the November 1957 issue of Life Magazine inspires Sonny to build his own rocket. Sonny and friends, Roy Lee, O'Dell and Sherman, create a primitive rocket from household items. They take the explosive powder from twelve cherry bombs and accidentally blow up Mrs. Hickham's fence when they set the rocket off. His father forbids him to build more rockets. His mother, who desperately wants Sonny to find a future outside of Coalwood, tells him that Coalwood is a dying town and asks him if he thinks he can build a real rocket. She makes it clear to Sonny that she believes he can build a real rocket, even though his father does not. She asks Sonny to prove his father wrong. She tells him she has some money to put him through college but he has to do what he can to find a way to get out of Coalwood. He tries to understand how the town can be dying. Sonny continues building rockets with the help of new rocket boy Quentin and his friends. Their first real rocket, Auk 1, flies six feet. Their rockets and the fuel mixtures continue to improve as do their results. The young men enter high school and keep building and flying rockets with the help of townsfolk who believe in them, including miners, teachers, friends and family members. A teacher, Miss Riley, encourages the boys to enter a rocketry exhibit at the county and state science fairs. Sonny does so and wins. He then heads to the National Science fair and receives a beautiful gold and silver metal. The boys launch the last of their rockets in a celebration with the entire town. Sonny and all of the rocket boys go to college. Sonny never meets Wernher von Braun but he does go on to fulfill his boyhood dream and become a NASA engineer, 21 years after he fired his last rocket. His father eventually dies from a coal mine related lung disease. Ultimately, the Coalwood mine is flooded and abandoned, though it lives in the hearts of its former inhabitants and through Sonny's memoir.

More summaries and resources for teaching or studying Rocket Boys: A Memoir.