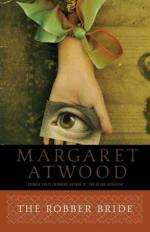 Margaret Atwood
This Study Guide consists of approximately 104 pages of chapter summaries, quotes, character analysis, themes, and more - everything you need to sharpen your knowledge of The Robber Bride.

This detailed literature summary also contains Related Titles and a Free Quiz on The Robber Bride by Margaret Atwood.

The Robber Bride offers a startlingly human look at the underlying reasons and results of the feminist movement of the 1960s. The novel interweaves the stories of its three female protagonists as it pieces together the history of their common enemy, Zenia. Tony, a history professor who specializes in battles, sets out to chronicle Zenia's life story as a series of battles. Zenia may not have been aware she was fighting battles, acknowledges Tony, but she left devastation in her wake wherever she went. Tony and her friends, Roz and Charis, have the misfortune of meeting up with Zenia at college. Had they not all become victims of Zenia, Tony, Roz and Charis would have made unlikely friends, but their shared pain gives them a common bond after Zenia makes off, one by one, with each of their husbands.

Tony likens Zenia's betrayal to a mugging. It seemed to Tony at the time as if Zenia had just walked right in, tucked Tony's husband, West, under her arm and marched him out the door. Of her three friends, Tony is the only one who manages to retrieve her man. Charis's boyfriend Billy, the father of her child, sails off with Zenia and is never heard from again. Charis wonders for twenty years if Billy is alive or dead. Roz, however, doesn't have the luxury of wondering. She knows her husband is dead because his body washes up on the shore. Mitch Andrews commits suicide after being dumped by Zenia, and Roz spends five years agonizing whether his death could have been prevented had she taken him back instead of slamming the door in his philandering face.

Zenia is no mere man-stealer. She is a blackmailer extraordinaire, a brilliant liar and a cold-hearted manipulator. Her history is littered with the trampled bodies over which she has trodden on her way to the top. She takes over Roz's magazine by lying about her credentials and charming the male board members, and she threatens to end Tony's career with an incriminating term paper that she convinced Tony to write for her back in college. Zenia has a seemingly bottomless bag of tricks, which includes coming back from the dead.

The novel opens with Zenia's return. Tony, Roz and Charis all attended her funeral five years prior, and yet when they see Zenia walk into the restaurant where they are having lunch, none of them is surprised. Zenia's history with each woman is revealed in a series of flashbacks. By the time the reader has been brought up to date, a week has passed in the present-day timeline, and the three protagonists prepare themselves for a confrontation with Zenia. Each of the women is accorded a final showdown with Zenia in her hotel room. That night, Zenia's body is discovered in the fountain below her hotel room window. This time, Zenia is definitely dead.

The death remains a mystery to the end. Each of the three protagonists has the motive and the means to do away with Zenia, but so do plenty of other people. No clear solution is reached. Tony, the historian, notes that history is often inconclusive. The dead are in the hands of the living. Zenia was always a worthy opponent, and Tony admires her courage. She believes that Zenia's life deserves to be chronicled, as if by honoring the strength of her opponent, Tony honors herself and her own life. In the end, all three women find themselves strangely grateful to Zenia for helping them define who they are and what they stand for.

More summaries and resources for teaching or studying The Robber Bride.