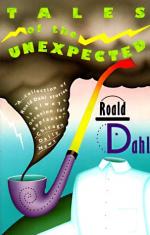 +Chapters Summary and Analysis
Taste
Lamb to the Slaughter
Man from the South
My Lady Love, My Dove
Dip in the Pool
Galloping Foxley
Skin
Neck
Nunc Dimiltis
The Landlady
William and Mary
The Way Up to Heaven
Parson's Pleasure
Mrs. Bixby and the Colonel's Coat
Royal Jelly
Edward the Conquerer
Characters
Objects/Places
Themes
Style
Quotes
Topics for Discussion
Order our Roald Dahl's Tales of the Unexpected Study Guide

Roald Dahl
This Study Guide consists of approximately 22 pages of chapter summaries, quotes, character analysis, themes, and more - everything you need to sharpen your knowledge of Roald Dahl's Tales of the Unexpected.

This detailed literature summary also contains Topics for Discussion on Roald Dahl's Tales of the Unexpected by Roald Dahl.

Mike is the host of the party in "Taste"; he is convinced that his guest will never be able to identify the wine he has chosen - to his detriment.

Mike's guest in "Taste" who cheats at identifying the wine in order to win Mike's daughter's hand in marriage.

A guest at the dinner party; an innocent bystander.

The character who gives away Richard Pratt's game in "Taste."

Mary Maloneyappears in Lamb to the Slaughter

The wife of Patrick Maloney, who ends up killing him with a leg of lamb and then serving the lamb to the investigating officers.

Patrick Maloneyappears in Lamb to the Slaughter

A police officer who has decided to leave his wife - but who gets murdered in the process.

Noonanappears in Lamb to the Slaughter

One of the investigating police officers who eats the lamb - the murder weapon.

O'Malleyappears in Lamb to the Slaughter

One of the investigating police officers who eats the lamb - the murder weapon.

Narratorappears in Man from the South

The narrator is a witness in this story, whereby a cadet and man enter into a bet.

Manappears in Man from the South

The nameless man who is fascinated by betting people's fingers against cars in otherwise meaningless bets.

Cadetappears in Man from the South

The young American man who takes the Man's bet about the lighter. Initially hesitant, the Cadet becomes enamored of the idea of the car and agrees to the Man's conditions.

Wifeappears in Man from the South

One of the Man's victims, who eventually won a car from him.

Arthurappears in My Lady Love, My Dove

The slightly hapless husband in the story, who has some sense of morality yet follows his wife's bidding.

Pamelaappears in My Lady Love, My Dove

Arthur's conniving wife, who both insists on bugging their guests' room and later, on learning how to count cards to cheat at bridge. A stubborn, unpleasant woman.

The Snapesappears in My Lady Love, My Dove

The bridge partners of Arthur and Pamela, the Snapes seem like a wealthy, pleasant young couple but actually make their living cheating at bridge.

Mr. Botibolappears in Dip in the Pool

The protagonist of the story, who decides that he will win the betting pool. He is overwhelmed by his desire for money, and goes to extremes to attain it in this case.

Purserappears in Dip in the Pool

An important member of the ship's crew, who wrongly tips off Mr. Botibol about the following day's progress.

Womanappears in Dip in the Pool

The only witness to Mr. Botibol's fall; she is somehow mentally incapacitated, or believed to be so, and nobody believes her story about the man falling.

A straight-laced businessman and commuter, overwhelmed by injustices from the past brought up by the memory of Foxley.

The bully who tormented Perkins back at school.

The actual man who sits opposite Perkins on the train; pleasant, he bears a slight resemblance to Foxley.

A tattoo artist, who later becomes destitute and despondent, and then decides to sell the "art" on his back.

Drioli's friend; a painter who was in love with Josie and who later became famous. The artist who tattooed Drioli's back.

Drioli's wife; a charming woman, whose portrait is now on his back, and who died in the war.

A weak man; an art collector who was a popular bachelor until Natalia "captured" him in marriage.

A journalist who desires entry into the Turton home and who gets it by talking to Natalia at a party.

The pompous narrator of the story, who decides to take revenge for a reported slight by showing a picture of the gossiper nearly nude.

The gossiper and lady friend of Lionel, who perhaps poisons him with caviar.

The "friend" of Lionel's who reports Janet's gossip back to him.

The portrait painter celebrated about town for his accurate and flattering paintings of women.

The owner of the bed and breakfast where Bill Weaver stops by; apparently a little looney, the landlady taxidermies her pets as well as her visitors.

Bill Weaverappears in The Landlady

A young businessman traveling for work.

Williamappears in William and Mary

The controlling, pompous, and unpleasant professor who is married to Mary and decides to have his brain preserved after his death.

Maryappears in William and Mary

The put-upon wife of William, who was initially set against his plan to have his brain kept alive in perpetuity.

Landyappears in William and Mary

The scientist who proposes to William that he preserve his brain after his death.

Mrs. Fosterappears in The Way up to Heaven

The nervous and ever-punctual protagonist of the story, Mrs. Foster is driven mad by her husband's lateness and stalling.

Mr. Fosterappears in The Way up to Heaven

The stalling husband of Mrs. Foster.

The cheating antique dealer who pretends to be a parson to lure valuable furniture out of unsuspecting victims' hands.

The farmers from whom Mr. Boggis buys the commode. They are a dull bunch, but attempt to be helpful; they think that they are, in fact, duping Mr. Boggis.

Mrs. Bixbyappears in Mrs. Bixby and the Colonel's Coat

The clever but fading wife of Mr. Bixby, Mrs. Bixby had a long-standing affair outside of the city.

Mr. Bixbyappears in Mrs. Bixby and the Colonel's Coat

A dentist who appears to be a dupe but is actually having an affair of his own.

Miss Pulteneyappears in Mrs. Bixby and the Colonel's Coat

The object of Mr. Bixby's affection; his receptionist.

The mother of a new baby, Maud is Albert's wife and horrified by the measures he has taken to feed their baby.

A bee-keeper, Albert has been entranced by the possibilities of using royal jelly for various purposes; he is stubborn and secretive, and has been deceiving his wife for some time.

Edwardappears in Edward the Conqueror

Louisa's husband; a no-nonsense man who does not want to put up with a composer reincarnated as a cat.

Louisaappears in Edward the Conqueror

Edward's musical wife, who discovers that their cat is the reincarnated composer Franz Liszt. A superstitious woman.

More summaries and resources for teaching or studying Roald Dahl's Tales of the Unexpected.