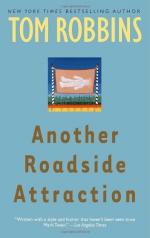 Tom Robbins
This Study Guide consists of approximately 42 pages of chapter summaries, quotes, character analysis, themes, and more - everything you need to sharpen your knowledge of Another Roadside Attraction.

This detailed literature summary also contains Related Titles and a Free Quiz on Another Roadside Attraction by Tom Robbins.

Rogue scientist Marx Marvelous tells the story of free-spirit Amanda and her soul mate, the famous artist John Paul Ziller. The couple starts an unconventional zoo and hot dog stand, where they explore a new spirituality. After stealing the Corpse of Jesus Christ from the Vatican, John Paul ends up presumed dead. Amanda remains as a symbol of a new spirituality.

As the story begins, Ziller and Amanda are married within hours of meeting, joined together in matrimony by their colleagues in the Indo Tibetan Circus and Giant Panda Gypsy Blues Band. The newlyweds settle down in Skagit Valley in a rural area of Washington. There they buy an abandoned barbecue restaurant, laying the foundation for what will soon become The Capt. Kendrick Memorial Hot Dog Wildlife Preserve. Together with Amanda's infant son Thor and John Paul's baboon Moc Cul, the new family stakes its claim in the world.

With circus life behind them, the Zillers work tireless to get their unorthodox "zoo" up and running. Reasoning that it is cruel to cage animals, their zoo's attractions will include only two garter snakes, a flea circus and a tsetse fly encased in amber. The tedium of their labor is lightened by a strange, exciting letter from their friend Plucky Purcell. It seems that he has unwittingly infiltrated the Society of the Felicitator, an order of assassin monks which serves the Vatican in Rome.

Amanda suffers a tragic accident which causes her to miscarry her second pregnancy. To pay her medical expenses, John Paul is forced to sell the Non-Vibrating Astrological Dodo Dome Spectacular, his most prized artistic work. Marx, as narrator, speaks from a later-time perspective to portend that the arrival of a mysterious Corpse will soon set monumental events into motion. In the present, Amanda and Marx are federal custody. It is from this perspective, as a captive, that Marx tells the story.

The story continues. Amanda and John Paul, hearing that someone tried to steal a baboon from the Seattle zoo, decide to post bail for the would-be thief. The "thief" turns out to be none other than Marx Marvelous, rogue scientist and the man who will go on to write John and Amanda's tale. After a short interview, Marx is hired to run and manage the Zillers' roadside zoo. Marx believes that John and Amanda are at the forefront of a new spirituality that will eventually replace Christianity.

John and Amanda continue to receive letters from Plucky Purcell. Still disguised as a monk of the Felicitators, Plucky is transferred to the Vatican. Not long after his arrival, a large earthquake rattles Vatican City, opening long sealed vaults beneath the city. Meaning to plunder these vaults, Plucky stumbles upon something he never anticipated: The unrisen Corpse of Jesus Christ. Plucky steals the Corpse and, by disguising it as a plaster sculpture, smuggles it back to America, to the Zillers' roadside zoo.

Unable to decide what to do with the Corpse, and realizing that government is hot on their tail, John Paul and Plucky run off with the Corpse, leaving Amanda and Marx to wonder where they went. Days later, Marx and Amanda learn that Plucky was killed while helping John Paul board an experimental balloon bound for Earth's upper atmosphere. John Paul is presumed dead, the Corpse destroyed, both disintegrated by solar radiation. Marx concludes the story by suggesting that the reader consider Amanda as a messianic replacement for Jesus.

More summaries and resources for teaching or studying Another Roadside Attraction.

Another Roadside Attraction from Gale. ©2005-2006 Thomson Gale, a part of the Thomson Corporation. All rights reserved.