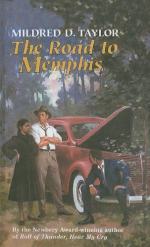 The Road to Memphis Characters

Cassie is the 17-year-old narrator of the story, who accompanies Stacey, Moe, Clarence and Willie along the road to Memphis. She expresses some of the story themes directly.

Stacey is Cassie's older brother. He buys the car that enables Moe's escape from Mississippi.

Moe loses his temper and strikes the Aames brothers with a crowbar. He must leave Mississippi to avoid harsh punishments.

Jeremy is a friend to the Logans and their friends. He helps Moe to escape from Mississippi, bringing on the wrath of his father, once he admits to this.

Solomon is a handsome, successful black man. He helps the group in Memphis. He becomes a romantic interest...