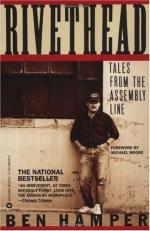 This detailed literature summary also contains Topics for Discussion and a Free Quiz on Rivethead: Tales from the Assembly Line by Ben Hamper.

Rivethead: Tales from the Assembly Line by Bernard Egan "Ben" Hamper III, is a work of non-fiction. The book details the life of an average kid in Flint, Michigan who was pre-destined to end up working as a shoprat in one of the ten auto factory plants in the region. No one ever sets out to be a "shoprat;" it just seems to happen that way.

Hamper's father, Bernard, slaved in the factory until the man could stand it no longer. Everyone in Hamper's family and extended family had put in their time at the factories. Bernard Hamper I answered the call in 1930. The man spent the next forty years watching as the automobile industry changed and evolved. The grandfather retired, which was against the original plan and died from cancer at age 52. It had been exactly one week since the former worker had received his first pension check.

Hamper goes on to relay the auto-related careers of most of his family, dating back to his great-grandfather. Hamper surmises that the lineage would have spread back even farther if Henry Ford would have invented his contraption a little sooner.

Hamper's childhood is not easy. While all the other kids had fathers that were totally committed to their chosen auto factories, Hamper II had little to no ambition except to find the next bar. This put Mrs. Hamper and Ben into unique positions. Mrs. Hamper worked two jobs while Ben became the man of the house, helping to raise his six younger brothers and sisters.

Hamper became a proud underachiever in school. Despite lectures about behavioral issues and terrible report cards, Hamper III continued to slack off on work - even when it was obvious he was capable of doing better. The parents tried to explain that it was expensive to send him to Catholic school, and it was important for him to get a good education. Not everyone was expected to go to work in the factories, and it was clear that Hamper III's parents wanted something more for him. It seemed ridiculous to Hamper that his underachieving father would dare to give such lectures.

Hamper ended up barely graduating just in time to marry his pregnant girlfriend. The marriage disintegrated quickly with Hamper's heavy drinking and intermittent employment. Hamper finally got a job at GM's Truck and Bus Line, first in the Cab Shop and eventually, on the Rivet Line. The majority of the book details the experiences and exploits at the factory. Hamper introduces many unusual characters. The factory's motto might have been the old adage, "You don't have to be crazy to work here but it helps."

Lay offs and restlessness led Hamper to trying his hand at writing again. At first it seemed futile. Hamper met Michael Moore, founder of the Flint Voice, when he submitted a record review. The association led to the birth of Impressions of a Rivethead and Hamper's subsequent success. In the end, Hamper leaves the factory life due to an acute anxiety disorder. It would not stop the author, however, from recounting the 11 years he worked as a GM shoprat.