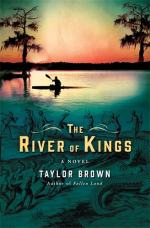 Taylor Brown
This Study Guide consists of approximately 37 pages of chapter summaries, quotes, character analysis, themes, and more - everything you need to sharpen your knowledge of River of Kings.

This detailed literature summary also contains Quotes and a Free Quiz on River of Kings by Taylor Brown.

The following version of this novel was used to create this study guide: Brown, Taylor. The River of Kings. New York: St. Martin’s Press, 2017.

The River of Kings follows three parallel storylines. The novel alternates between the storylines throughout, but for the sake of clarity in this plot summary, each storyline will be presented one at a time. The earliest chronological storyline takes place in the 1560s. A French colonial expedition lands in modern-day northern Florida and is welcomed by the Saturiwa tribe of Native Americans. The Frenchmen promise to help fight the Saturiwa’s enemies, the Utina tribe, but they late renege on this promise and thereby become enemies of the Saturiwa tribe. The Frenchmen try and fail to form an alliance with the Utina tribe. Later, a faction of the French expedition acts against orders and leaves to go plunder Spanish settlements. The remaining Frenchmen stay at their settlement, and eventually the mutineers return, having been defeated by the Spanish. The mutiny leaders are sentenced to death. A famine begins and the Frenchmen begin to starve to death. They flee when Spanish conquistadors attack, and some of the Frenchmen manage to return safely to France.

Another of the book’s three storylines follows the life of Hiram Loggins from 1975 to about the year 2000. Hiram is a Vietnam War veteran who makes a living fishing on the Altamaha River. However, one night in the 1970s, he tries to make extra money by smuggling illegal drugs. His fishing boat is seized by law enforcement. That same night, he begins a long-term love affair with a married woman named Annabelle. Hiram eventually marries a different woman, but he remains in love with Annabelle. He has two sons, Lawton and Hunter, whom he loves very much. Hiram eventually manages to save enough money for a new fishing boat, but the boat is soon lost in a storm. After this second major setback in his life, he becomes angry and somewhat directionless. Eventually, he decides to make money by illegally hunting sturgeon and selling their eggs, which make valuable caviar. However, one day, a sturgeon from the river happens to strike and kill him.

The book’s other storyline takes place in the present day. Hiram’s two sons, Lawton and Hunter, canoe down the Altamaha River with their father’s ashes in order to ceremonially scatter them in the ocean. Hunter, the younger brother, is a college student studying history, and Lawton is a Navy SEAL. On their journey, they meet a man named Uncle King. They eventually learn that Uncle King was a friend of their father’s. Uncle King became partially insane ever since the accidental death of his two children. He has since become obsessed with hunting the Altamaha-ha, the mythical monster of the Altamaha River. Lawton feels that their father may not have actually been killed by a sturgeon strike, so at his insistence, the two brothers investigate their father’s death. They eventually discover that their father organized an illegal sturgeon hunting operation towards the end of his life and that he was in fact killed by a random sturgeon strike. They eventually reach the Atlantic Ocean and scatter their father’s ashes there.

More summaries and resources for teaching or studying River of Kings.