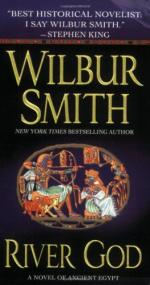 Wilbur Smith
This Study Guide consists of approximately 52 pages of chapter summaries, quotes, character analysis, themes, and more - everything you need to sharpen your knowledge of River God.

This detailed literature summary also contains Topics for Discussion and a Free Quiz on River God by Wilbur Smith.

At its heart, Wilbur Smith's novel, River God, is a love story. The narrator, Taita, is a slave. He is well educated and loyal to his mistress, whose name is Lostris. Lostris is a young lady at the beginning of the novel. She is full of romantic ideas and interested in her childhood friend, Tanus, as a future mate. Tanus is a kind young man, fiercely loyal and equally interested in Lostris. The two make promises to one another, but fate intervenes. Lostris is the only daughter of a wealthy noble, Lord Intef, who ensures his favor with the Pharaoh by promising his daughter in marriage. Pharaoh Mamose believed that a young and virgin bride would provide him with a well-bred heir to his crumbling kingdom. Lostris went reluctantly to Pharaoh's palace and brought Taita with her. Over the years that followed, Lostris did bear a son who eventually inherited the Egyptian kingdom. His name was Memnon and he was a strong boy who received an excellent education on both scholarly and military fronts from his mother's closest friends, Taita and Tanus. Like his sisters who would come after him, Memnon was sired by Tanus, not Pharaoh, but their paternity was kept a secret. Memnon was raised as prince regent and his sisters as princesses.

Troubling times fell upon Egypt. Its boarders were attacked continuously and gradually the prime instigator, the Hyksos people and their ruler, Salitas, drove the Egyptians into exile. Pharaoh Mamose died in battle, and Lostris, fearing for her son's safety and the future of Egypt, fled southward. Following Pharaoh's death, Lostris inherited the regency until Memnon came of age. Thousands of her people followed her to exile. For over ten years she and all her followers traversed the Nile riverbanks continuing southward to the place of the Nile's origin. Battles were waged, deaths endured, and new babies born. Memnon reached adult age and took a wife by the name of Masara. She was not Egyptian, but like the relationship of Lostris and Tanus, their love could not be denied. Towards the end of the novel Lostris leads her people back to their homeland. By that time Tanus had died and Lostris lost her will to live. Fortunately, the task that Lostris set out to accomplish (to keep Memnon safe so he could return and set Egypt free from its suppressors) was nearly complete. Memnon returned north to Egypt's delta and engaged the Hyksos' military in battle. During their exodus, Lostris developed cancer. She returned to Egypt with Memnon and died in Taita's arms. Taita had loved her from the perspective of a man, not just as her servant, and his pain would have been overwhelming except that Memnon still required his friendship. Taita continued to live with Lostris' family and serve them after her death.

More summaries and resources for teaching or studying River God.