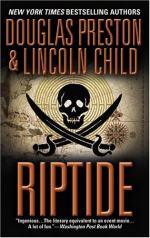 Douglas Preston
This Study Guide consists of approximately 36 pages of chapter summaries, quotes, character analysis, themes, and more - everything you need to sharpen your knowledge of Riptide.

This detailed literature summary also contains Topics for Discussion and a Free Quiz on Riptide by Douglas Preston.

"On an afternoon in June 1790, a Maine cod fisherman named Simon Rutter became caught in a storm and a strong riptide. His dory overloaded with fish, he went badly off course and was forced to put in at Fog bound Ragged Island, six miles off the coast. While waiting for the heavy weather to pass, the fisherman decided to explore the deserted spot." (Prologue, pg. 1) Thus begins the exciting adventure, Riptide by Douglas Preston and Lincoln Child. Rutter returns to explore the area and dig at a mysterious spot where there is a depression, moved a rock and the area flooded with seawater, killing Rutter. The area became known as the Water Pit and it was the subject of many legends, including that of pirates treasure. Treasure hunters were still trying to access the tunnel into the twentieth century, and each met with disaster and filed bankruptcy. There were several injuries and deaths associated with the digging throughout the years. Hatch bought the island in 1940, and died, bankrupt, two years later.

Malin Hatch has always refused offers to dig on the island, until Captain Gerard Neidelman appears one day with an offer he decides not to refuse. Hatch has buried the past by leaving Stormhaven some twenty years earlier. He is now ready to tackle the past and put it to rest by facing the island and its secrets.

Thalassa Ltd has the latest technology and equipment and hires specialists in each of the areas. They try to deny the curse by the use of science and technology. Neidelman, like any treasure hunter, is motivated by greed but it is more than that. He is obsessed with St. Michael's Sword, and this is his undoing in the end.

The Thalassa people have done their research on the pirate and vault designer, Macallan. They have his journal which was written in invisible ink and encrypted. They think that if they break the architect's code, they will hold the key to the Water Pit and the estimated two billion dollars in treasure that it holds. The team, along with Hatch, study the other works of the architect to discover the secrets of the Water Pit and how Macallan, who knew he would be killed by the pirate, orchestrated his revenge.

As the work begins, they find a mass grave with many skeletons who were buried with their valuables. They have unexplainable computer problems on the island, and their people come down with strange illnesses. Is this the curse at work?

Preston and Child have written an exciting and suspense filled novel that the reader will find hard to put down. The book is fast reading and well worth the reader's time.