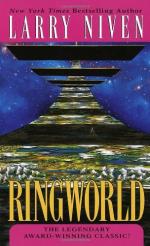 Larry Niven
This Study Guide consists of approximately 48 pages of chapter summaries, quotes, character analysis, themes, and more - everything you need to sharpen your knowledge of Ringworld.

In Ringworld, 200-year-old human Louis Wu is recruited by a two-headed alien named Nessus to join him, a catlike warrior alien named Speaker, and the infinitely lucky human Teela Brown to explore an alien artifact. They find a Ringworld, a ribbon millions of miles long built around a distant sun. The civilization has fallen into savagery, though, and after crashing into the Ringworld, Louis must come up with a clever plan to get back to known space, hundreds of light years away.

Nessus is a member of an infamously cowardly race of aliens called puppeteers that fled known human space hundreds of years ago after discovering that the stars at the core of the galaxy had exploded into supernovae 10,000 years ago, meaning the harmful radiation will hit civilization in about 20,000 years. Nessus, who is mad enough to ride on spaceships, has stayed behind. Now, he needs help. On Louis Wu's 200th birthday, Nessus recruits the adventurous human to help him on a mysterious mission. Then, Nessus finds a warlike kzin, a catlike alien, named Speaker-to-Animals, who is an ambassador to Earth. Nessus offers them both the technology of a super-fast hyperdrive that travels a light year in five-fourths of a minute in exchange for their help.

Nessus has problems finding the fourth member of his crew, until he accidentally runs across the girl he's looking for at Louis's birthday celebration. Teela Brown is the daughter of six generations of lucky lottery winners, bred for luck. The group takes off for the puppeteer home world. They've taken their planet with them, moving it across the galaxy to escape the coming core explosion.

On the puppeteer world, the party learns that their destination is a ring built around a sun. It can provide enough living space for any race, making population problems obsolete. Speaker, Louis, Nessus, and Teela take off to explore the alien world. They find the radio waves are dead near the Ringworld, and as they approach it, the world appears deserted of civilization. As they are exploring, they crash into the alien world and find themselves in the middle of a desert, next to a giant mountain.

The party travels toward the rim of the Ringworld to try to find help. On the way, they realize that the puppeteers have been manipulating both the human and the kzinti races, trying to breed the kzinti to be more peaceful and the humans to be luckier. Teela is a result of the luck breeding, and she proves that she does have the power of luckiness when she saves herself from certain death by accidentally passing out on the exact controls that will save her.

Louis realizes that all the party's problems, including their ship's crash, are part of the plan of Teela's luck, designed to bring her to Ringworld. She falls in love with a local hero and plans to stay. Meanwhile, Louis realizes that the mountain they crashed near is a crater, a thousand miles into the sky. Louis and Speaker finally pull their ship up to the opening and launch back into space to get back to civilization.