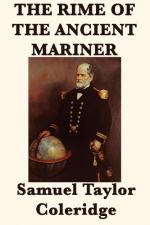 The Rime of the Ancient Mariner Topics for Discussion

1. A wedding guest who does not know the mariner is forced to listen to his tale.

Is this device effective? Is the guest meant to guide the reader's response to the mariner's tale?

2. A wedding is a social celebration of natural order and of new beginnings.

Why is it significant that the mariner tells his story to a wedding guest? Would the moral of the story have been changed if the mariner told his tale to the groom or bride?

3. In later versions of the poem, Coleridge removed many archaic words and spellings that appeared in the original version. Among his revisions was the addition of the epigraph and the marginal glosses. How important are the glosses to your understanding of the poem? Does this suggest that Coleridge was successful or unsuccessful in conveying his meaning poetically?

4. Many Romantics believed that a writer could...