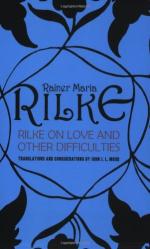 +Chapters Summary and Analysis
Prologue and Letters on Love
Poems on Love
Poems on Other Difficulties
Blood-Remembering
The Dragon-Princess
The Difficulty of Dying: Rilke's Self-Composed Epitaph
Free Quiz
Characters
Objects/Places
Themes
Style
Quotes
Topics for Discussion
Order our Rilke on Love and Other Difficulties, Translations and Considerations of Rainer Maria Rilke Study Guide

Rilke on Love and Other Difficulties, Translations and Considerations of Rainer Maria Rilke Characters

Rainer Maria Rilke
This Study Guide consists of approximately 27 pages of chapter summaries, quotes, character analysis, themes, and more - everything you need to sharpen your knowledge of Rilke on Love and Other Difficulties, Translations and Considerations of Rainer Maria Rilke.

Rilke on Love and Other Difficulties, Translations and Considerations of Rainer Maria Rilke Summary & Study Guide includes comprehensive information and analysis to help you understand the book. This study guide contains the following sections:

Rainer Maria Rilkeappears in Throughout

The writer and poet on whose life's work this book is focused is a turn-of-the-century writer and thinker who inspired the author, John L. Mood with his wise and eloquent prose and sensual and insightful poetry. The major themes in his work centered around the importance of continuously learning in the subjects of love and life, and to allow for all of the phases of one's life to inform the others. Most pointedly, sex is a teacher to him about spirituality and each human's connection with the whole of humanity, and death is, according to Rilke, a fact of life to be embraced and invited to inform and lend timeless significance to every one of life's experiences. Rilke was very outspoken in his writing on the subject of female empowerment and the need for a complete change in the way men and women approach their interactions, and in those subjects, he was generations ahead of his time. He forged close friendships with psychoanalyst and author Lou Andreas-Salome, feminist Ellen Kay, sculptor Auguste Rodin, writer and philosopher Fredrick Nietzche, Sigmund Freud and several other of the most progressive thinkers of his time.

He did his writing in German, and much of it when he was in his forties, after he had lived and experienced a good deal. He called on symbolism from nature and classic literature, but the major themes of his writing are his own completely original and unique ideas, a characteristic attributable to the fact of his life experiences and extensive study.

John L. Moodappears in Throughout

It is Mood's perspective through which Rilke is surveyed, and his favorite excerpts that are presented. Mood's admiration for Rilke's unabashed proclamation of ideas about feminism and male and female relationships that only began to gain ground in culture in the 1960s when Mood was reading Rilke's work. He is also inspired by his perspective on the importance of continuing one's dedication to learning throughout one's life in the areas of love and

Orpheus, the Greek god of poetry and song, and charmer of animals and trees, symbolizes song and its presence is nature in Rilke's poetry. The rose is also symbolic of Orpheus ans vice-versa.

The lover in the phallic poems is a nurturing and adoring lover, enjoying the woman and her body the way one enters a temple or a beautiful place in nature. He speaks symbolically of their lovemaking, as if he were leaving her offerings.

She is the object of the poet's worship and compared in his adoration with a tree, the heavens, a temple, and a mountain.

The young lover who competes with the poet for the freedom to play with her own breasts during love-making.

She is the woman wishing to feel the touch of her lover as she stands under trees, and in the second poem, who notes with sadness that the garden goes on growing even while she is so sad.

Maturing Girlappears in Poem from end of 1923

The girl whose piggy-tails in youth change to curls pinned-up when she is older, coincident with her changing body and dress.

Philosopher and writer, and close friend to Rilke, thereby shaping his perspective and voice.

More summaries and resources for teaching or studying Rilke on Love and Other Difficulties, Translations and Considerations of Rainer Maria Rilke.

Rilke on Love and Other Difficulties, Translations and Considerations of Rainer Maria Rilke from BookRags. (c)2022 BookRags, Inc. All rights reserved.