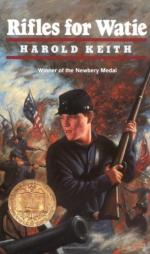 Harold Keith
This Study Guide consists of approximately 82 pages of chapter summaries, quotes, character analysis, themes, and more - everything you need to sharpen your knowledge of Rifles for Watie.

Rifles for Watte begins at the Bussey family farm in Linn County, Kansas, during the spring of 1861. Once Jeff Bussey enlists in the Union Army, his company moves through Missouri, Arkansas, and Texas, but most of the action takes place in territory belonging to the Cherokee Nation, with brief forays into areas belonging to the Creek Nation and the Choctaw Nation. All of this land is now part of Oklahoma. The novel ends in June 1865, when Jeff returns to his family's farm after his discharge from the army, but Keith suggests that Jeff will soon return to the Cherokee Nation to marry Lucy Washbourne.

More summaries and resources for teaching or studying Rifles for Watie.