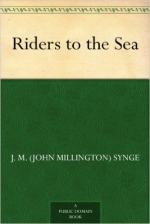 John Millington Synge
This Study Guide consists of approximately 19 pages of chapter summaries, quotes, character analysis, themes, and more - everything you need to sharpen your knowledge of Riders to the Sea.

Riders to the Sea Summary & Study Guide includes comprehensive information and analysis to help you understand the book. This study guide contains the following sections:

This detailed literature summary also contains Quotes and a Free Quiz on Riders to the Sea by John Millington Synge.

Riders to the Sea is extolled to have been John Millington Synge's greatest play, and is likely based on the second visit he made to the Aran Islands. Set in a cottage on Inishmaan which is the central island of the Aran group, the story follows Maurya and her daughters as they discover that the sea has taken even more from them.

Having already lost four sons, one husband, and a father-in-law to the perils of the sea, Maurya is understandably bereft when the son considered her favorite, Michael, seems to be lost at sea. For nine days she mourns, searching the sea for his body, but by the time Bartley is taken by the sea as well, Maurya is all but numb to the sorrow of loss she has had to bear, and continues to bear.

Bartley is lost when the pony he is leading to Galway fair knocks him into the rough sea, he having decided to go despite Maurya's assertions that she will be left without so much as a single son to be the man of the house. Maurya accepts the final loss gracefully, observing that finally the sea can take no more from her. She sprinkles holy water on Bartley's body and Michael's clothing, which are all that she has from him and then acknowledges the truth that no man can live forever, and in the end we have no choice but to be satisfied.

More summaries and resources for teaching or studying Riders to the Sea.

Riders to the Sea from BookRags. (c)2022 BookRags, Inc. All rights reserved.