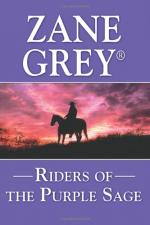 Riders of the Purple Sage Summary & Study Guide includes comprehensive information and analysis to help you understand the book. This study guide contains the following sections:

This detailed literature summary also contains Related Titles and a Free Quiz on Riders of the Purple Sage by Zane Grey.

Published in 1912, Riders of the Purple Sage is one of the original books in the American Western genre. As a forerunner for such great Western authors as Louis Lamour, Zane Grey's book includes elements now considered to be classic: a lonely, misunderstood gunfighter and a woman in need of protection. Lassiter is a man whose very name strikes fear into the hearts of men; reputed to be a vile, soulless killer, Lassiter is actually an honorable man who wields his big guns only in the name of personal justice. Lassiter's eighteen-year quest to find his sister, Milly Erne, finally ends at Milly's hidden gravesite on Jane Withersteen's ranch in Utah. Kidnapped by Mormons and brain-washed into becoming a Mormon wife, Milly was forced to leave her real husband behind. Frank Erne is the father of the child which she births while in captivity. When Lassiter meets Jane, he learns Milly had defied her captors, and for this they had stolen her little girl away. Milly died heartbroken in her friend Jane Withersteen's arms.

Jane herself is a Mormon woman. Unmarried, she controls nearly all the wealth in the town of Cottonwoods, which she has inherited from her rich father. Tull, a Mormon Elder, has long sought her for his wife. Good-hearted Jane believes Tull really loves her, although she does not love him, but in truth Tull merely wants to marry her so he can take ownership of her property. Jane's loving heart bids her to repeatedly flout her churchmen's restrictions against befriending Gentiles. Her close friendship with the handsome Gentile rider, Bern Venters, worries Tull. If Jane marries Venters, the Mormon Church will lose control of Jane's riches. Tull uses his power within the church to make Venters an outcast in Cottonwoods. Venters does not fight back because he has promised gentle Jane not to take up arms against her fellow Mormons. Yet the arrival of Lassiter inspires Venters to stand up for himself and fight like a man.

Lassiter and his guns save Venters from the savage beating which Tull had planned for him. In retaliation, Tull calls in Jane's Mormon riders, leaving her cattle unprotected. When the red herd is stolen by the rustler, Oldring, Venters retrieves his guns, says goodbye to Jane, and heads into Deception Pass in search of Oldring's hideout. Here the story diverges along two parallel tracks, as Venters tracks Oldring in Deception Pass and gradually falls in love with Oldring's Masked Rider, Bess. Back at the ranch, Jane uses all her womanly wiles to convince Lassiter to put down his guns and turn his back on violence. She succeeds only in making Lassiter fall in love with her. Lassiter refuses to put down his guns while Tull's men continue to steal from Jane. In the end, Tull's men succeed in taking everything away from Jane - everything except her newfound love for Lassiter. Together, she and Lassiter turn their backs on Withersteen Ranch forever and ride away in a desperate attempt to escape Tull's armed bandits.

The fleeing couple crosses paths with Venters and Bess, who are fleeing Deception Pass and Oldring. When Lassiter and Jane recognize Bess as the long lost daughter of Milly Erne, Jane gives Venters and Bess her horses. Only Jane's fleet horses, Black Star and Night, can possibly outrun the armed men who seek to kill the four fleeing fugitives. Unable to flee without their horses, Lassiter and Jane take refuge in the hideout Venters has been using in Deception Pass. Called Surprise Valley, the hideout is filled with enough livestock, water, fertile ground, game, and supplies to feed Lassiter and Jane indefinitely. The entrance to Surprise Valley is protected by Balancing Rock, a huge boulder placed at the entrance of the valley by ancient cliff-dwellers; in case of attack, the rock can be pushed off its pedestal to start a landslide and close the entrance. To escape their pursuers, Lassiter and Jane are forced to tip over Balancing Rock, thus trapping themselves together, forever, inside Surprise Valley. From miles away, Bess and Venters are celebrating their newfound freedom when they hear the tell-tale sound of the great boulder destroying the entrance to their former hideout.

Riders of the Purple Sage from BookRags. (c)2022 BookRags, Inc. All rights reserved.