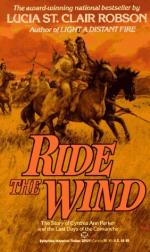 Ride the Wind: The Story of Cynthia Ann Parker and the Last Days of the Comanche Summary & Study Guide

Lucia St. Clair Robson
This Study Guide consists of approximately 42 pages of chapter summaries, quotes, character analysis, themes, and more - everything you need to sharpen your knowledge of Ride the Wind.

Ride the Wind: The Story of Cynthia Ann Parker and the Last Days of the Comanche Summary & Study Guide Description

Ride the Wind: The Story of Cynthia Ann Parker and the Last Days of the Comanche Summary & Study Guide includes comprehensive information and analysis to help you understand the book. This study guide contains the following sections:

This detailed literature summary also contains Topics for Discussion and a Free Quiz on Ride the Wind: The Story of Cynthia Ann Parker and the Last Days of the Comanche by Lucia St. Clair Robson.

Ride the Wind by Lucia St. Clair Robson is a well-researched historical fiction about the life of Cynthia Ann Parker. The novel opens with a Comanche raid on the Fort in Texas where the Parker family lives, and Cynthia is taken captive at the age of nine. Her brother is also taken captive as is her cousin, her cousin's baby, and her aunt. They are at the very edge of the wasteland west of the Brazos northeast of Austin, Texas. The situation between the whites and the Comanche is becoming tense with the end of the Mexican War, the influx of the white man, the westward movement, and the shrinking Native American hunting and camping grounds. The Comanche live as nomads, setting up camp, hunting and gathering, then moving on a few weeks later to a new camp. In this way, the People honor Mother Earth by not overgrazing her and not sticking sticks into her the way the farming cultures do. They are a free people, generally loving and peaceful, until they need something. That is when the raids begin. Wanderer is on the raid on Parker's Fort more by accident than intention, but he recalls his promise to Sunrise and Takes Down The Lodge that he is to find a replacement daughter for them. When he sees Cynthia Ann Parker, he realizes that she must become that daughter for them, and eventually determines that she will one day become his wife.

The story moves forward with Cynthia Ann's adoptive family who treasure her as one of their own. The raid on her family's fort leaves her shaking and fearful for a very long time, as the savageness of the attack was terrifying. The Indians take what they want, whether they are belongings, sex, or people to be used as slaves or to be adopted into the tribe. Cynthia Ann's cousin, Rachel, is used as a slave and sexually assaulted throughout her entire captivity. Cynthia Ann, or Naduah, is the beloved daughter of a kind and close family. As time passes, Naduah becomes fully one of the People, forgetting her language and her past. She comes to love her new mother, father, and grandmother as deeply and intensely as she could ever love anyone in the past. At first the dirty conditions and constant moving bother Naduah, but soon she comes to understand the philosophy of the People, and learns to love the freedom that is available to her in her new life.

As time goes on, the white man further encroach on the Comanche hunting grounds and it becomes harder and harder for the People to continue their way of life. They used to follow the herds of buffalo for their subsistence from the animals. When the Comanche kill buffalo, they use every scrap of the animal for their livelihood. The meat for food, the hides for clothing and shelter, sinews for bows and binding material, the bones for nutrition and tools, and the hooves for glue. Nothing in the animal goes to waste. The white man has different ideas. Buffalo hides are very precious back east, and buffalo hunters come out, kill hundreds and hundreds of buffalo, taking only their skins, and leaving the rotting carcasses to litter the plains. This drives the buffalo away from normal hunting grounds, and the Comanche must either travel further afield to find game, or turn to raiding in order to supplement their food and supply needs. Naduah is part of the tribe and sees how it affects her people. The white man also brings sickness. One band of Comanche people is entirely decimated by a smallpox infection. Everyone in the village dies.

Naduah and Wanderer are at the tail end of the great and powerful Comanche way of life. Their children will either die of disease or end up on a reservation. Naduah bears three children with Wanderer, Quanah the oldest son destined to become important because of his ability to work with the white man. Pecan, the younger son, and Flower their youngest, a daughter both die in childhood. Wanderer dies in battle. Naduah is recaptured in 1860 and returned to her white family who keep her locked in a windowless room in a cabin because of her repeated attempts to flee. She never does return to the white way of living, and dies in white captivity.

More summaries and resources for teaching or studying Ride the Wind: The Story of Cynthia Ann Parker and the Last Days of the Comanche.

Ride the Wind: The Story of Cynthia Ann Parker and the Last Days of the Comanche from BookRags. (c)2022 BookRags, Inc. All rights reserved.