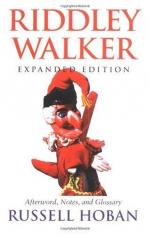 Russell Hoban
This Study Guide consists of approximately 30 pages of chapter summaries, quotes, character analysis, themes, and more - everything you need to sharpen your knowledge of Riddley Walker.

Set in the ashes of a destroyed England, 2,000 years in the future after nuclear war has demolished civilization, the novel follows the narrator and protagonist, Riddley Walker, as he seeks to uncover truth and history. “Inland,” as Riddley’s world is now known, has been obliterated and mankind is slowly rebuilding civilization in what reflects the English Iron Age. Villagers hunt and gather as well as mine for iron ore from the remains of ancient machines from the “Bad Time.” Their folklore and mythology are taken from remnants of historical popular culture, often misinterpreted, sparse Catholic doctrine, and the Punch and Judy Show.

Riddley’s twelfth birthday is his “naming day,” in which he becomes a man and spears a wild boar. Three days later, Riddley’s father dies and Riddley kills the leader of a wild pack of dogs, thus beginning the boy’s epic journey. The folklore of Riddley’s world revolves largely around the “Eusa Story,” a tale which metaphorically represents the destruction of the world by nuclear force. After being inducted as a “connexion man” for his village in the footsteps of his father, Riddley seeks to connect the answers between his reality and the history which created it.

Riddley is led by a pack of wild dogs, which are deadly enemies of humans in this post-apocalyptic world, to find a young man trapped in a dungeon seeking help. Riddley saves the Ardship of Cambry, also known as Lissener, and begins a journey to Cambry to help the Eusa folk, a people who were once the rulers of the world and had the highest technology. Along the way, Riddley learns the history of the Eusa folk and their conflicts with Abel Goodparley, the "Pry Mincer” of Inland and the Ram, or governing system.

Riddley’s devotion to Lissener is doubted when he meets again with Goodparley, whose insights into the history of creation, destruction and the aftermath of the world open Riddley’s mind. The discovery of a powdery yellow stone creates added intensity to the search through the different parties to uncover the riddle behind folk tales based upon the “Eusa Story” and other documents from the “Bad Time.” Their conquest is a search to find the secret behind the “1 little 1,” which refers to gunpowder, and the “1 Big 1,” which alludes to nuclear power and weaponry.

Riddley makes and loses many alliances along his journey. In the end, his “connexion,” or enlightenment, relates to the fact that the most powerful are those who do not seek power at all. Riddley continues on his journey, reenacting Punch and Judy performances in a traveling entourage, accompanied by the great pack of loyal dogs.

More summaries and resources for teaching or studying Riddley Walker.