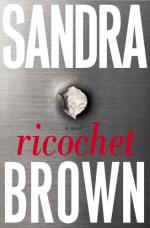 Sandra Brown
This Study Guide consists of approximately 21 pages of chapter summaries, quotes, character analysis, themes, and more - everything you need to sharpen your knowledge of Ricochet.

This detailed literature summary also contains Quotes and a Free Quiz on Ricochet by Sandra Brown.

“Ricochet” by Sandra Brown is the story of Duncan Hatcher, a Savannah homicide detective. The story opens with Duncan and his partner, DeeDee Bowen, sitting in the courtroom of Judge Cato Laird during the murder trial of Richard Savich who is accused of murdering Freddy Morris. Richard Savich is a powerful and dangerous crime boss who Hatcher has been after for years. He walked on another murder charge just a few years back. Duncan is nervous because the lawyers and judge have been out of the courtroom in a lengthy conference. When they return, Cato announces that because of the perceived bias of one of the jurors, he is forced to call a mistrial. He tells Savich’s attorney that his client is free to go. Duncan goes wild! The murderer is slipping through his hands again. He accuses the judge of being incompetent which results in Duncan spending 48 hours in jail for contempt of court.

The very evening that Duncan gets out of jail, he and DeeDee have to attend an awards ceremony. He are surprised and not very happy to see that Judge Cato is also in attendance. As Duncan gazes around the room, his eyes stop on a beautiful blonde. He tells DeeDee that he was struck by lightning – it was love at first sight for him. DeeDee informs him of the sad truth that the beautiful blonde is Elise Laird, Judge Laird’s young wife. Duncan approaches her later and out of a combination of resentment for her husband and disappointment that she’s taken, he says a few rude and inappropriate things to her.

Later that night when Duncan is sleeping off a few too many beers, the phone rings. It’s DeeDee who tells him that there’s been a homicide and that she’ll pick him up in a few minutes. On the way to the scene, Duncan is shocked to learn that the homicide occurred at Judge Laird’s house. Duncan has the silent hope that the victim wasn’t the beautiful Elise. As it turns out, Elise was the shooter. She shot an intruder who she claimed shot at her first. Duncan and DeeDee interview Elise and the Judge but they stick to their story even though things aren’t quite adding up for the detectives. Duncan is even more intrigued by the beautiful judge’s wife.

As the investigation gains momentum, more and more inconsistencies emerge ultimately making the detectives convinced that someone is lying – either Elise or the judge. Duncan is hoping that Elise is on the level but DeeDee is siding with the judge. Elise is aware of Duncan’s feelings for her and she gets him alone to ask for his help. He refuses – he’s a cop and she is part of his investigation. When Elise gets him alone the second time, they give into their temptations and fall into each other’s arms.

Things are further complicated when Elise is seen with crime boss Savich and the finger of guilt seems to turn toward her and she becomes the number one suspect in the case. But Elise goes missing and all signs point to her involvement in another murder and that she may very well be dead herself. Duncan is in despair but he doesn’t give up on the case or on Elise. Just after the department announces it has stopped searching for her, she shows up at Duncan’s door. He is preparing to turn her in when he learns that her husband has just identified the dead body of a woman who popped up in the river. It seems that Cato has a lot of explaining to do.

In the end, Duncan solves the complicated case like the good homicide detective he is. Elise has a lot of things to work out in her life. One problem she doesn’t have is finding a good man who really loves her.

More summaries and resources for teaching or studying Ricochet.