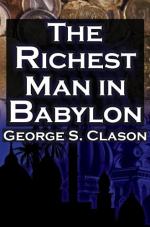 George Samuel Clason
This Study Guide consists of approximately 36 pages of chapter summaries, quotes, character analysis, themes, and more - everything you need to sharpen your knowledge of The Richest Man in Babylon.

Several men go to visit Arkad who is called the richest man in Babylon. Arkad is very generous and spends liberally, but he has also managed to amass a large store of wealth for himself. Arkad did not start out in life as a wealthy man but worked hard to save money. His friends come to him now because they continue to work hard but have so far been unable to save anything for themselves.

Arkad first counsels his friends on believing too heavily in fate. Arkad tells the men that Fate is indeed fickle and cannot be trusted. Even those who Fate rewards are seldom truly happy since she takes away as quickly as she gives. Arkad then begins to tell his friends how he came to accrue his wealth.

(read more from the Chapter 2, The Richest Man in Babylon Summary)

More summaries and resources for teaching or studying The Richest Man in Babylon.

The Richest Man in Babylon from BookRags. (c)2022 BookRags, Inc. All rights reserved.