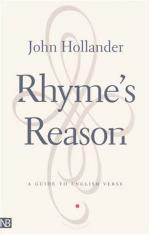 This detailed literature summary also contains Topics for Discussion on Rhyme's Reason: A Guide to English Verse by John Hollander.

"Rhyme's Reason" is an examination of the various forms and schemes used in English poetry written by John Hollander. Hollander's unique approach to describing these systems is to use self-referential poetry to both explain and provide examples of the systems he is discussing.

Hollander begins by defining five general types of verse; pure accentual verse that is based on a fixed pattern of accents, accentual-syllabic which combines regular patterns of accents with common syllabic length, Pure syllabic verse that has lines of a fixed number of syllables, free verse that does not hold to any formal pattern of meter or rhyme, and quantitative verse, an uncommon English form.

Focusing primarily on accentual-syllabic verse, which is the most common form in poetry written in English, Hollander moves on to discuss the terms used to refer to the "feet" in the most common meters. He explains how meter can affect the meaning of words and the tone of a poem by shifting emphasis to different parts of the verse.

After looking at the variations in meter, Hollander describes several verse types common in English poetry that use the accentual-syllabic form, including couplets, quatrains, sonnets and other types likely to be familiar to regular readers of poetry. Hollander also examines the various ways in which rhyme is used and offers critical advice to writers of verse on what makes a rhyme effective.

Hollander traces how several classical verse types taken from Greek and Latin verse were adapted by English writers to fit the particular elements of the language, and he provides several examples of original verse that illustrate how the "ghosts" of these older schemes survived even into modern verse.

Hollander completes the main portion of the book with short passages describing several other verse types, both common and uncommon, using verse that both illustrates and offers advice on the proper usage of each form. In an extensive appendix to the book, Hollander offers several examples of self-referential verse written by classical and modern poets like Alexander Pope, Wordsworth, Burns, Browning, Dante, John Ashbery and several others.

The book follows a general pattern of defining broader concepts then offering specific examples, but Hollander frequently digresses and backtracks to pick up earlier discussions. Throughout the book, Hollander maintains a light and humorous tone while offering advice to those composing verse on how to use rhyme, meter and the various verse forms to add emphasis and meaning to verse. A poet himself, Hollander holds some definite views on what poetry is, which he shares frequently. In the appendix he gives time to some opposing views about rhyme and meter offered by some of the best known names in poetry.