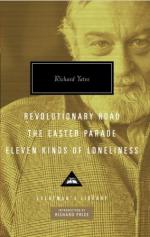 Richard Yates (novelist)
This Study Guide consists of approximately 54 pages of chapter summaries, quotes, character analysis, themes, and more - everything you need to sharpen your knowledge of Revolutionary Road.

This detailed literature summary also contains Topics for Discussion and a Free Quiz on Revolutionary Road by Richard Yates (novelist).

Revolutionary Road is a tragi-comic novel that begins with an emphasis on absurd comedy but ends tragically. Long considered a literary cult classic since its publication in 1961, it is a searingly lucid exploration of the anesthesia of suburban middle America that can prove fatal to basic human decency and values. Frank and April Wheeler are a young couple in their late twenties with two children who follow the great suburban migration that characterized America in the mid-1950s. Somewhat reluctantly, fully aware that life in suburban Connecticut may not suit them, the Wheelers buy a home near a housing development generally referred to as Revolutionary Hill Estates. Frank is a graduate of Columbia University who works at a nebulous job which he hates at Knox Business Machines in New York City, to which he commutes by train daily.

The story begins with the spectacular failure of a play produced by the startup community theater group in which April Wheeler has a leading role. April—tall, beautiful, and talented—studied theater in college and had half-hearted ambitions as an actress before marriage followed pregnancy which followed a hot summer romance with Frank in a dingy apartment in the city. The Wheelers fight viciously after the play, Frank gets drunk, April sleeps alone on the sofa. A pattern is therefore established, which recurs with greater frequency and ferocity as the novel develops. The Wheelers judge themselves to be superior to the other suburbanites with whom they rub shoulders—more talented, more sophisticated, worthy somehow of a better and more interesting life. Heavy drinking and smoking are ubiquitous features of their marriage, as is the growing sense of alienation that creeps over both Frank and April.

Frank Wheeler drifts into an extra-marital affair with a young woman at the office. After the initial sex act, he finds her not particularly interesting, and with a guilt-ridden conscience, wonders whether he should break off the budding liaison. Returning home late and drunk after his encounter with Maureen Grube, Frank Wheeler finds in the pelting cold water of a shower the resolve not to tell his wife of his dalliance. There is a relative calm in their relationship, and April comes up with the idea that they should sell their house and move to Paris. She tells Frank that she's read in a magazine about how easy it is for Americans to get jobs in Europe and that the standard of living differential makes Americans wealthy in Old Europe. She offers to work part time to support the family—with the help of a domestic maid—while Frank wanders and explores ways to "find himself".

At first reluctant and skeptical of April's plan, Frank soon realizes it may be the best way to save his marriage and family, and agrees to go along. Just as soon as they've made up their minds and set a date to move, the top brass at Knox Business Machines become enamored of a sales brochure that Frank has produced and ask for him to produce more of the same, in anticipation of the coming computer age. Frank is shocked because he wrote the brochure in a what-the-hell frame of mind without really caring how it came out. Suddenly, he's a star at his company as his superiors tantalize him with the prospect of a bigger job and bigger salary. Torn in different directions, Frank likes the recognition at the office and the prospect of more money but still finds the work dreadful and wants to keep his family together.

As Frank begins to feel more hopeful at work, his passive resistance to April grows and fuels their further alienation. Both drink too much; Frank begins to question April's sanity (but not his own) and suggests that she see a psychiatrist. More fights, standoffs, reconciliations and chilly disconnections ensue. Their children, a boy and girl, become confused and irritable about the on-again, off-again plans to go to Paris. In the midst of this marital meltdown, the Wheelers are approached by Helen Givings—the real estate agent who sold them their house—to ask whether they'd consider having their son, John, over for a visit one Sunday afternoon. John Givings is a patient at Greenacres, a state mental hospital, and is being allowed outside visits. Helen and Howard Givings, his parents, hope that pleasant encounters with people outside his family will help speed their son's recovery. John is a former mathematician who has been diagnosed as paranoid-schizophrenic; the electric shock treatments have erased all memories and abilities in the math area.

They agree, and John shows up with his parents looking every bit the mental patient with clothing that is obviously from some state institution, chain smoking, and guffawing awkwardly. After eating two plates of hors d'oeuvres, John drills the Wheelers about their plans to move to Europe, why and how they plan to accomplish the move. When Frank mentions the emptiness of their lives in America, John Givings nods in agreement. After he leaves with his parents, April and Frank agree that John is the only person who seems to understand their desire to move. And Frank quips that means they must be as crazy as he is.

April reveals to Frank a few days later that she's pregnant. After an initial shock, Frank tries to take a hopeful attitude that the new baby is good news and won't interfere with their plans. He then discovers a drugstore home abortion kit in the coat closet and confronts April. She tells him defiantly that she'll give herself an abortion whether he likes it or not. Frank asks April to reconsider the move to Europe and her attitude toward the pregnancy, suggesting that she's not altogether rational and urging her to see a psychiatrist. They go out for drinks and dancing at a local club with an older couple, Shep and Milly Campbell. Shep Campbell has burned with a secret desire for April since a similar outing the previous summer when they danced together, sweaty and inebriated. Through a complication involving parked cars at the nightclub, Shep gives April a ride home and Milly rides with Frank. In an instant, April and Shep are rolling in the back seat, making passionate love.

Frank breaks off his affair with Maureen and returns home to Connecticut, feeling pleased with himself. Tactfully, he tries to talk to April about their estrangement and why she has stopped sleeping with him. He confesses his affair and says it meant nothing to him, that he wants to strengthen his relationship with April. But she tells him directly that she doesn't love him, that she never did love him, and she couldn't care less who he sleeps with. John Givings, wacko mathematician, makes another appearance at the Wheelers' house with his parents, who've already told him they are not going to Europe and that April is pregnant. In his loopy fashion, John hones in on the real reason why they've decided to stay, snarling condemnation at both of them and saying he's grateful he's not going to be their child. Frank, fists raised and trembling, angrily tells John to shut up.

Afterwards, Frank and April drink heavily and Frank goes into a rage, demanding to know why April didn't go through with the abortion. In a furious climax, he tells his wife that he wishes she'd done the abortion.She flees the house and disappears into the dark woods; Frank gives drunken, noisy chase but can't find her. He returns to his well-lit house, turns off the lights, and searches the woods for April. Frank sees a tiny point of light when she lights a cigarette, then nothing. He's on the phone talking to the babysitter when April cruises in, acting as if nothing had happened. When he awakens, Frank doesn't want to go to work but realizes he must. April, calm and caring, urges him to go and meet with his boss about his big promotion. She greets him with a hot breakfast, a smile and a kiss, and wishes him well at the office. April tries to write him a note, but crumples it and then burns it outside. When she returns to the house, she writes another brief note telling Frank not to blame himself, whatever happens. Then she gets out the abortion kit.

April, bleeding profusely, calls the rescue ambulance and is taken to the emergency room. Frank gets a call at work from Shep Campbell telling him that April is hospitalized following a miscarriage. The Campbells and Frank arrive at the hospital at the same time. As Shep is wandering in search of coffee, Frank gets the word from the doctor that April has died. Frank moves his children to Pittsfield, where they can stay with relatives, and he moves to New York City so he can be closer to work and visit his children on weekends. The long-darkened Wheeler home is finally sold to another young couple, who eventually hear the story of the Wheelers from their Realtor, Helen Givings.

More summaries and resources for teaching or studying Revolutionary Road.