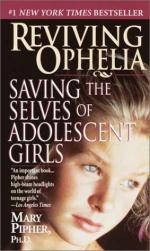 Mary Pipher
This Study Guide consists of approximately 47 pages of chapter summaries, quotes, character analysis, themes, and more - everything you need to sharpen your knowledge of Reviving Ophelia.

Dr. Pipher is a clinical psychologist with over twenty years of experience. She grew up in a small Midwestern town in the 1950s, and she strives to help her patients overcome the obstacles in their lives today. She wrote Reviving Ophelia with the hope of reaching parents, educators, and other youth leaders with her concerns about the environment in which these girls are growing to adulthood. She dispels traditional gender stereotypes.

Dr. Pipher points to many conflicting forces that make young girls miserable. Schools are inadequate. Girls study primarily about men in class. They read His-tory. They learn about the evolution of Man-kind. Teachers are inevitably biased toward the boys in the classroom. Sexual harassment and cliques are prevalent in American junior high schools. Many adolescent girls direct their pain toward alcohol, drugs, or self-mutilation. The threat of rape is chillingly real.

More summaries and resources for teaching or studying Reviving Ophelia.