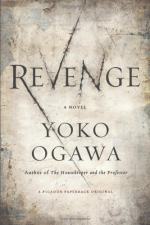 “Revenge: Eleven Dark Tales” is a collection of eleven dark, short stories by Yoko Ogawa which have common strands of plot between them, but which stand on their own separately. All of the stories deal with death or revenge in some way, shape, or form. In “Afternoon at the Bakery”, a widowed mother heads to a bakery in her new neighborhood to purchase a strawberry shortcake. She does this in honor of her son, who has been dead for twelve years. Nothing in the woman’s life has been right since then, including her own suicide attempt, and her husband leaving her. The woman must impatiently wait on the girl who is running the bakery.

In “Fruit Juice”, the young girl who runs the bakery invites a boy to accompany her to meet her father for the first time since her mother is dying of cancer. On the way home, deeply saddened, the girl breaks into a kiwi storage house to eat through her sadness.

In “Old Mrs. J”, the narrator, a writer and stepmother, moves into a hilltop apartment building surrounded by gardens and orchards, and owned by Mrs. J. The narrator comes to learn that Mrs. J. grows kiwis, and has murdered and buried her husband on the hill. Strangely, the husband’s corpse is found missing its hands, while the carrot crop yields hand-shaped carrots.

In “Lab Coats”, a doctor is having an affair with a secretary at the hospital, but does not press his wife for a divorce or come to see the secretary, for he too is stuck on the train bound in by snow. This leads the secretary to become angry, who then murders the doctor.

In “Sewing for the Heart”, a bag maker who has shunned all real human connections in favor of making bags is approached by a woman with an external heart seeking a bag to protect her heart. The bag maker takes on the challenge, developing a closeness with the woman and her heart. When the woman opts for surgery instead of a bag, the bag maker feels betrayed and travels to the hospital to kill the woman before her operation.

In “Welcome to the Museum of Torture”, the neighbor of the secretary from “Lab Coats” is questioned about the murders by the police. The woman, obsessed by death, distances her boyfriend with her interests, causing the woman to go for a walk. She ends up going into the Museum of Torture, where she meets the old caretaker and plots revenge by torture on her boyfriend.

In “The Man Who Sold Braces”, the narrator’s uncle, the caretaker of The Museum of Torture”, has died. The narrator reflects on his uncle’s life, including how in addition to being a caretaker for the Museum, also took care of a pet Bengal Tiger for the two spinsters who owned the Museum.

In “The Last Hour of the Bengal Tiger”, the wife of the doctor having an affair in “Lab Coats” is on her way to confront the secretary when a tomato truck accident causes her to turn around and get lost. The wife comes to a beautiful house and garden, where she sees the uncle comforting the dying tiger.

In “Tomatoes and the Full Moon” the now-paranoid stepmother of “The Little Dustman” collects some of the tomatoes from the truck accident and gives them to the hotel where the Narrator is staying. The Narrator is the father of the dead boy who factors into “Afternoon in the Bakery.”

In “Poison Plants’, the person who first discovers the dead boy is revealed to be an old, lonely woman.