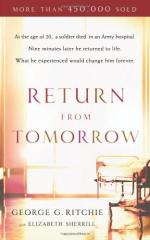 George G. Ritchie
This Study Guide consists of approximately 10 pages of chapter summaries, quotes, character analysis, themes, and more - everything you need to sharpen your knowledge of Return from Tomorrow.

At forty, George Ritchie returns to school to complete his degree in psychiatry, giving up his practice as a medical doctor. On a particular day, George has arrived at the office early, saying that he always spends time in the mornings praying about the patients scheduled for the day. On this particular day, Fred Owens has an appointment after lunch. George knows that Fred has just gotten out of the hospital, having been diagnosed with lung cancer, which would be fatal in a short period of time. The past months have been an effort to help Fred work through issues in his life and he says that it's now all been wasted. George believes that sharing his own story with Fred to be the way to reach the man.

George was a young military recruit who joined because he saw his own father - well past the age that he might have been drafted - willing to serve. He was in west Texas, alternately wading through deep mud and dealing with dust, and wondering if he'd made a mistake in giving up his medical career to be a foot soldier when he's told that the need for doctors is so high that he's going to be returned to Virginia to attend medical school. While waiting to leave for home and school, he becomes ill and is soon running a raging fever along with many others on the base. Then he's standing in one of the tiny isolation rooms and someone else is in his bed. He knows that he needs to be in Virginia so that he can begins school on time and with that in mind, takes off in that direction.

What he doesn't discover until later is that he is the person in the bed and that he's been declared officially dead. He spends some time in the hospital where no one sees or responds to his repeated attempts to make contact. He does rush off toward Richmond, sees many things along the way before realizing that he is without his body and returns to search for it. When he finds his body again, the room is suddenly filled with a bright light and George learns that this is Christ. He's then shown what George describes as a form of hell in which the dead walk through the lives of others, never being able to make contact. The suicides are horrible, begging for forgiveness from their loved ones and unable to make themselves heard. Then there are those with earthly addictions who are destined to spend eternity trying to fulfill those addictive needs but unable either to move on or to be satisfied.

Christ then takes him on to a complex that George likens to a well-organized learning campus where he sees those quietly at work on many tasks. Though George begs not to be sent back to the earthly body, a young med tech urges a doctor to administer adrenaline, and George spends the next weeks recovering from the pneumonia that holds his body.

Over the coming years, he flunks out of medical school, is returned to military service and works with the survivors of prison camps before eventually returning to complete medical school. It's a long time before he realizes that he hadn't been prepared for death on that long-ago day, though he'd longed for it. He spends the rest of his life learning and reaching out to others, eventually coming to a point of personal understanding that he successfully imparts to Fred.

More summaries and resources for teaching or studying Return from Tomorrow.