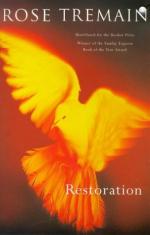 Rose Tremain
This Study Guide consists of approximately 48 pages of chapter summaries, quotes, character analysis, themes, and more - everything you need to sharpen your knowledge of Restoration.

This detailed literature summary also contains Topics for Discussion and a Free Quiz on Restoration by Rose Tremain.

Restoration is a historical novel set in London, England during the 17th century, approximately 1660-70, during the reign of King of Britain Charles II. The principal character is Robert Merivel, who tells in the first person his coming of age story from age nine. He is a half-educated physician and surgeon. He leaves school when, following the death of his father, the King's glove maker, the King out of respect appoints Merivel as physician to the palace dogs. His status increases until the King orders him to marry the King's mistress Celia, as part of a scheme to hide her from the public eye as his mistress. He sets Merivel up with a manor, a thirty-room mansion in Norfolk and all the amenities.

However, Merivel ultimately commits the mortal sin. He falls in love with Celia, and as a result the King banished him from the palace and royal courts. Merivel ends up joining his best friend, Pearce, a Quaker, at an isolated and primitive Mental Health Hospital, run by other Quakers. During his stay there, his friend Pearce dies. He makes love with and impregnates a patient, whom he has no feelings for, and he is banished from the facility with Katherine, the patient, in tow. She ultimately has his baby and dies in childbirth. The female baby is named Margaret and left with a wet-nurse. Lost again, Merivel bounces aimlessly around London during the waning days of the London plague, all the time longing to be with the King again, whom he considers like a God. He becomes progressively more and more frustrated and then he becomes ill. After his collapse and coma, he is restored by the King to a room in his former mansion. His future and his health are left up in the air.

More summaries and resources for teaching or studying Restoration.