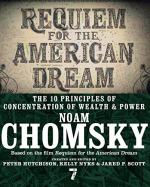 Requiem For the American Dream Summary & Study Guide includes comprehensive information and analysis to help you understand the book. This study guide contains the following sections:

This detailed literature summary also contains Topics for Discussion on Requiem For the American Dream by Noam Chomsky.

The following version of this book was used to create this guide: Chomsky, Noam. Requiem for the American Dream. Seven Stories Press, 2017.

From the outset of Requiem for the American Dream, Noam Chomsky sets the grim yet well-paced tone with two brief introductions dedicated to his idea of the American Dream and the cyclical nature of the concentration of wealth and the concentration of power. "Right through American history," patterns of inequality can be seen at every level of society, from labor, to education, to welfare, and any other public or social institution (1). Chomsky has dedicated this study to the motivations behind the rise of the wealthy business elite, as well as its implication on the general population. Chomsky's motivation is simple: "these things ought to be overcome" (5).

In a society historically obsessed with the concepts of freedom and democracy, there has been an overwhelming decline or stagnation in the quality of life for most the population, as well as a decline in the average person’s voice in the political arena. Meanwhile, a small sector of the top one percent of the population grows in prosperity and separation from the lives of common citizens, yet they maintain almost absolute control over public policy. Inherently, this system is unnatural to Chomsky, yet the population has become subdued by the efforts of the business elite into apathy and passivity.

The past thirty years of American history have seen a significant change in the structure of the economy and the priorities of the political system. Control of the economy has shifted from the majority- the working class, the middle class, etc.- to the wealthy minority due to the growth of the financial sector and the effects of offshoring. As large corporations became more powerful, the tax burden was shifted on the rest of the population, adding to their decline and stagnation. Though the tax burden increased, the distribution of government money became more heavily skewed in favor or the elite, as they attacked the principles of sympathy and solidarity behind programs like Social Security, Medicaid, and public education.

As the economy was restructured, the political spectrum seemed to be shifted in its entirety to the right. Ideas and initiatives supported by the population fell by the wayside, as the business elite solidified their access to policy with huge investments. Sensing a popular backlash to this offensive, labor unions were attacked and the public relations industry was born. Labor unions, though once critical to progressive movements and protecting the population against corporate greed, have become obsolete in the current political climate. The result is a marginalized population stripped of faith in government and reduced to mechanical skills.

While most of Chomsky’s text is grim, each section provides a small glimmer of hope, as Chomsky continuously stresses the effectiveness of organized, thoughtful political activism against economic inequality. The offensive efforts on behalf of the wealthy elite have been active and relentless for forty years; thus, Chomsky is not naïve about the necessary scope of a successful mobilization. He claims the reader should be able to see “quite clearly” the defects in modern society, and organize around these defects (150). Other critically-minded activists are essential to this process, as Chomsky claims the only way rights are won is by “hard, courageous, popular struggle” (150).