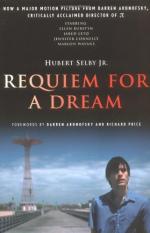 Requiem for a Dream: A Novel Summary & Study Guide

Hubert Selby Jr.
This Study Guide consists of approximately 49 pages of chapter summaries, quotes, character analysis, themes, and more - everything you need to sharpen your knowledge of Requiem for a Dream.

Requiem for a Dream: A Novel Summary & Study Guide Description

Requiem for a Dream: A Novel Summary & Study Guide includes comprehensive information and analysis to help you understand the book. This study guide contains the following sections:

This detailed literature summary also contains Topics for Discussion and a Free Quiz on Requiem for a Dream: A Novel by Hubert Selby Jr..

Harry and his mother, Sara Goldfarb, fight over his addiction to heroin. Sara lives alone in the apartment where she raised her son before her husband passed away. Harry lives with his friend Tyrone C. Love and it is common for the two of them to pawn Sara's TV for drug money. Harry and Tyrone spend their days hanging out with other friends who use various types of drugs, hustling just enough money to get by. One summer they come across a particularly potent batch of heroin and Tyrone comes up with the idea that they should buy a large supply, stretch it out and sell it for almost double profit. The two friends start this venture around the same time that Harry starts a relationship with a girl named Marion. Their lives become tied to one another with the drug sale plan and for a while everything runs smoothly. As time passes, the friends start using too much of the product they are selling and things start falling apart. They lose their connection to the high-rate drugs and can only buy the same drug that everyone else on the street is buying and even that becomes hard to find. Eventually selling becomes an afterthought an using becomes the most important thing to them. They all ignore the signs as they sink deeper into their addictions leading them each to a grim fate.

Meanwhile, Sara gets a phone call from a man claiming to work with a television network. He talks to Sara about the possibility of featuring her on a television show and she is ecstatic. She has lived alone for many years and television is her life. For her the chance would be a dream come true and she gets to work almost immediately on improving her appearance. Sara already has a slight obsession with food but she ignores it, insisting that she fit into a red dress she last wore when Harry was a teen. When a diet proves unsuccessful one of Sara's friends suggests visiting doctor she knows of. The doctor prescribes diet pills to take with her three daily meals. Sara's obsession transfers from food to weight loss and she quickly gets addicted to the pills. Sadly, she isn't aware that the pills are the problem and she can only focus on getting contacted by the television company and fitting into her red dress. Sara barely has the opportunity to recognize that she has a problem until things get really out of control. No one knows what is going on with her so she ends up spending her days alone in a mental hospital.

More summaries and resources for teaching or studying Requiem for a Dream: A Novel.

Requiem for a Dream: A Novel from BookRags. (c)2022 BookRags, Inc. All rights reserved.