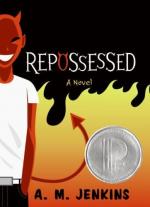 A. M. Jenkins
This Study Guide consists of approximately 29 pages of chapter summaries, quotes, character analysis, themes, and more - everything you need to sharpen your knowledge of Repossessed.

This detailed literature summary also contains Topics for Discussion on Repossessed by A. M. Jenkins.

Published in 2007, Repossessed is the fourth of seven novels written by Texas-based author Amanda M. Jenkins. Jenkins was a high-school mathematics teacher before embarking on an award-winning career as a young adult novelist. Repossessed is an allegorical-type novel that describes what happens when Kiriel, a devil from hell, decides to take a break from his duties in the underworld and experience life on Earth for a few days. To accomplish this, he "hijacks" the body of a suburban American teenager named Shaun Simmons, who had been accidentally killed in a traffic accident. This allows Kiriel to experience human life for the first time with all its sensations, ranging from joyous to depressing, poignant, and ordinary.

Repossessed takes place in a familiar landscape, an American suburb that should be familiar to any reader. Although the plot is "supernatural," there are no unusual or surreal scenes that would suggest an otherworldly or unrealistic setting. Even the few descriptions of hell itself are nothing out of the ordinary. Hell is not portrayed as the typical flaming underground cavern overseen by cloven-footed demons with pitchforks and tails.

Hell is described in a matter of fact way as a rather boring assembly-line, not unlike any familiar institution like a workplace or classroom. Indeed, most of the action in this novel takes place in only two settings: the characters' homes and the school that they attend. A few of the scenes take place in a school bus and one takes place in a Methodist church. None of the scenes take place in what would be other familiar suburban locales, such as a shopping mall, gas station, library, or recreation area. By focusing on these locales, the author lets the readers know that this is a book about the central locales in every male adolescent's life: his home (and that of his friends) and the school he attends. By eliminating references to shopping malls or recreational facilities, the author emphasizes that the characters, especially Shaun Simmons, are serious and well-behaved young people.

During his three-day sojourn on Earth, "Shaun" appears to his family and friends as the ordinary teenager they have always known, though his "soul" is really that of Kiriel, an omniscient Fallen Angel. Kiriel, whose name means "mirror of souls," is given the job in hell of reflecting people's sorrow and guilt back upon them, so they come to realize their true natures, albeit sinful. On Earth, Kiriel as "Shaun" performs the same function as a kind of benevolent provocateur, causing his family and friends to have experiences and insights that are significant learning experiences for them. Kiriel resolves to do three things while living on the earthly plane: to make sure Shaun's younger brother, Jason, breaks out of his shell and is taken care of; to have sexual intercourse with Lane, his high-school sweetheart; and to redeem the school bully, Reed McGowan, by confronting him with the errors of his ways. Kiriel accomplishes the first and last of these goals. As for his desire to indulge the sin of Lust, he only succeeds in kissing and making out with Lane and finds out that this has been her true heart's desire from the beginning as well. These three resolutions form the three subplots of the book, called "tree trunks" by "Shaun."

Not surprisingly, Shaun's solicitude toward Jason develops after he has been "repossessed" by Kireil. Without much ado, the older boy simply starts being nice to his younger brother, and this warmth and spontaneity eventually makes a difference. At first, Jason and his mother are surprised that "Shaun" is behaving in a more civil fashion, a development explained away as simply adolescent mood change. Jason finds it difficult to accept his brother's suddenly bizarre behavior, but he gradually is won over when he is invited to play video tames with "Shaun" and his older friends.

The relationship between "Shaun" and Reed McGowan also evolves after Kiriel has taken over. Whereas in the past Shaun shied away from confrontation with Reed, the repossessed "Shaun" is no longer afraid to stand up for himself when being bullied. To the credit of his new-found identity as a "mirrorer of souls," "Shaun" does not become aggressive; instead, he simply speaks truth to power and tries to get Ryan to see the reasons why he is behaving so shabbily.

In the third major subplot, "Shaun" tries to seduce Lane Henneberger in a convoluted fashion that will be familiar to most teenage males who have tried to figure out the mysteries of sex and romance. He involves his best friend, Bailey Darnell, as a co-conspirator. "Shaun" asks Bailey to invite Lane to his house so the three of them can do their homework together. This, hopes "Shaun," would give him an opportunity to have some private time together with Lane. The plot is foiled when Lane instead gets into an animated discussion with Bailey about his collection of manga comics. Undaunted, "Shaun" persists and gets invited to Lane's house the next day, where his attempts at seduction are thwarted by Lane's prudishness. "Shaun" concludes that he really only wanted to kiss and make out with her, anyway.

During the narrative, Kiriel also reflects on his own role as an overseer in hell, wondering if he was being punished by the Creator (God). He ends up being redeemed himself, accepting his purpose in life, even if that is to go back to hell. Just before he steps back into the afterlife by returning Shaun's "hijacked" body, he declares, "My place in this universe might not be what others would consider desirable. But it is mine."

More summaries and resources for teaching or studying Repossessed.