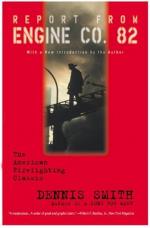 One hot September day, young Dennis Smith decides to apply to become a firefighter. He envisiones the life of a hero with the Mayor pinning medals on his chest and mothers tearfully thankful for saving their children. It was idealistic but compelling. He wanted to become one of New York's Bravest. After becoming a fireman, Dennis quickly learns that there is no glamor. He saw too much hurt and death. He had carried death in his own hands.

Pat looks at a recent scar on her husband's neck. It's from the burn of an ember. It's a vivid reminder of his job, a job with which she is growing increasingly disenchanted. Dennis tries to assuage her fears but is not successful. Pat acknowledges what he does is important and that their she and her sons are proud of him.