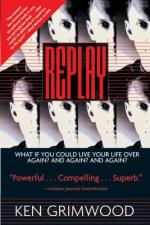 This detailed literature summary also contains Topics for Discussion and a Free Quiz on Replay by Ken Grimwood.

In Replay, Jeff Winston repeatedly dies and wakes up earlier in his life, living out 25 years over and over. He struggles with the meaninglessness of this repetitive life without a future, sometimes taking respite in drugs and sex. Eventually he meets and falls in love with Pamela, a "replayer" like himself. Then they realize their replays are becoming shorter and shorter. Soon, they will die, and they search desperately for answers, only to cause more problems. Finally, Jeff finds himself replaying over and over the moment of his death, until he comes out the other side with a fresh, unknown future in front of him.

As the story begins, in October 1988, Jeff is dying. He wakes up in his college days, in 1963, at eighteen, and at first he can't believe it. He realizes that he knows the future, and he bets on horse races and the World Series. Jeff finds himself a millionaire, owner of a huge investment firm, but he alienates his wife from his previous life. He marries a woman he doesn't love and has a beautiful child he adores. Then, Jeff dies again. He wakes as a college student. His daughter is gone. Jeff marries his college girlfriend and settles down to a simple, quiet life, adopting two children. In October 1988, despite the best medical care, he dies again and finds himself in 1963.

Jeff is distressed with the never-ending loop he's apparently leading. During his next replay, he hooks up with a party girl and goes to Europe, drifting into a life of drug use and meaningless sex. A plane crash leads Jeff to leave his life, and he retires into a mountain cabin as a recluse. Then, one day, Jeff sees an ad for a blockbuster movie he's never heard of. He's sure it's never existed in any of his lives, and he sees the name Pamela Phillips in the credits. Jeff makes an appointment to meet Pamela, and they realize they're both replaying 25 years of their lives.

Pamela and Jeff fall in love, seeking each other out in their next lifetime and sharing with each other what they can share with no one else. However, the length of their loop-backs are growing shorter, and so their lives seem to be slowly looping to an end. At first, Pamela and Jeff try to find others like themselves, but the only one they locate is a serial killer. Horrified, they realize they have wasted one loop torturing themselves. Then, they decide to reveal themselves to the world in hopes of getting the scientific community to investigate their plight. Unfortunately, Pamela and Jeff only cause harm and find no answers. They fight, part, and die alone.

On Jeff's next incarnation, he believes Pamela is gone forever, but he looks her up and has a relationship with her, even though she doesn't recognize him. Then, shortly before her death, she reawakens, and they part bitterly again. Jeff returns to his life closer and closer to his death, until he is replaying his heart attack over and over. Then, finally, he passes through the moment of his death, and he is still. His life is ahead of him, and the future is unknown.