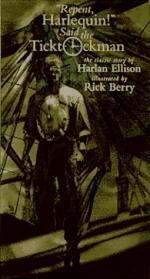 Harlan Ellison
This Study Guide consists of approximately 38 pages of chapter summaries, quotes, character analysis, themes, and more - everything you need to sharpen your knowledge of ''Repent, Harlequin!'' Said the Ticktockman.

1960s: The use of technology grows dramatically during the decade. Supercomputers are linked together to increase their power, and there is both widespread optimism about technology as well as unease with how technology will be used in the future.

Today: Computers are in nearly every home, and most computers are linked to the Internet. This linkage offers ready access to a great deal of information, but many computer uses have concern that the linkages can also divulge private information to a large audience.

1960s: The Soviet Union reaches superpower strength, and the United States engages in a cold war with that nation. Americans fear the Soviet way of life, seeing in communism a denial of individuality.

Today: The Soviet Union no longer exists, and communism is no longer a world force, except in China where the emphasis is still on the community rather than...

More summaries and resources for teaching or studying ''Repent, Harlequin!'' Said the Ticktockman.

''Repent, Harlequin!'' Said the Ticktockman from Gale. ©2005-2006 Thomson Gale, a part of the Thomson Corporation. All rights reserved.