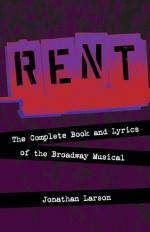 Jonathan Larson was born in Mount Vernon, New York, on February 4, 1960, to Allan and Nanette Larson. His family loved the arts, and Larson received much support and encouragement from them. The house was often filled with music, including his piano playing, which he was able to pick up by ear. In high school, Larson was called the piano man by his fellow students. While attending White Plains High School, Larson was very active in the music and drama departments. He became friends with a fellow student named Matt O'Grady, who would later be the inspiration for many of his characters as well as for the writing of Rent, Larson's most notable and only published work. In 1978, Larson attended the acting conservatory at Adelphi University on Long Island, New York, on a four-year, full-tuition merit scholarship. At Adelphi, he wrote his first musical...