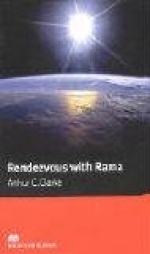 Arthur C. Clarke
This Study Guide consists of approximately 42 pages of chapter summaries, quotes, character analysis, themes, and more - everything you need to sharpen your knowledge of Rendezvous with Rama.

This detailed literature summary also contains Topics for Discussion and a Free Quiz on Rendezvous with Rama by Arthur C. Clarke.

Rendezvous with Rama by Arthur C. Clarke recounts the mission of the spaceship Endeavour and its staff as it completes an exploratory mission on an alien space vessel traveling though the solar system. The novel underlines the difficulties encountered by the explorers as they try to adapt to an environment that obeys the rules of physics in a place that is very different from the one found on Earth. The story concentrates on Bill Norton's character, the commander of the spaceship Endeavour, and the technical problems he faces as he tries to gather information and understand the world of Rama.

During the last quarter of the 22nd century, mankind spotted an unknown and unexpected space object traveling across the path of the planets toward the Sun. The object is named Rama and scientists send a probe near the object. The probe identifies Rama as an artificial, metallic object the size of a small meteorite, perfectly cylindrical and apparently inactive. A team of explorers is then sent on a mission to land on the object and explore its content. The team aboard spaceship Endeavour discovers a world whose physical characteristics are very different from that which prevails elsewhere in the universe and where the laws of physics apply to a self-enclosed, self-sufficient cylindrical world.

At first, the world of Rama seems to have been either asleep or dead for a million years as it drifted through space. Then as it gets nearer to the Sun, the cold and dark alien ship awakens without a warning and lights up. Life emerges from the depth of the Cylindrical Sea that cuts the Rama world in half. Evolution takes place at a highly accelerated pace as species of aliens are constantly born and later recycled by their environment. The explorers encounter different, non-threatening species of aliens. These alien creatures, party biological and partly robotic, are being repeatedly replaced by more complex beings over cycles lasting a few days.

The adventurers face different technological challenges and have to rely on both their own knowledge and the advice of a committee of scientists located on a different planet to conquer the secrets of Rama. The path of the alien ship forces the explorer's vessel to end its mission and leave just as the world of Rama seems to revert to its original dark, silent and apparently sleepy state. Rama then realigns itself and accelerates towards the Sun, then bounces off the fiery star and continues towards its unknown destination.