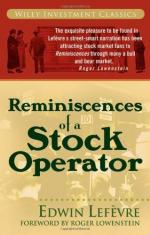 Edwin Lefèvre
This Study Guide consists of approximately 40 pages of chapter summaries, quotes, character analysis, themes, and more - everything you need to sharpen your knowledge of Reminiscences of a Stock Operator.

Reminiscences of a Stock Operator Summary & Study Guide includes comprehensive information and analysis to help you understand the book. This study guide contains the following sections:

This detailed literature summary also contains Topics for Discussion and a Free Quiz on Reminiscences of a Stock Operator by Edwin Lefèvre.

Reminiscences of a Stock Operator is a fictionalized account of the early life and rise to fortune of Jesse Livermore, one of the most famous speculators in history. Renamed Larry Livingston in this book, he gets his start as a young boy in the "bucket shops" of Boston, where small bets are made against the house on the rise and fall of stocks or commodities. Soon he graduates from quote-boy to beating the bucket houses at their own game, until they throw him out for winning too much. After that, he heads to Wall Street to try his hand at real trading, with many dramatic gains and losses along the way. Livingston becomes a force in the markets, which are not as highly regulated as they become eventually. His tips on speculating and human nature fill the pages and are still legendary among modern traders.

Livingston starts out as a quote-boy in the bucket-houses, where he quickly realizes he has a knack for understanding the movements of the various stock prices. He begins taking notes and making predictions, and eventually gives up his job in favor of betting on the prices. He does well and makes his first $1000 by the time his is 15. He has an excellent memory for the individual stocks and their patterns, and a head for figures. He begins making so much money in the bucket shops that they eventually ban him from betting.

Livingston decides to go to New York and try his hand at real trading on Wall Street. His stake is not very large and he does not have a way of increasing it in New York, because the bucket shops are closed down. He slowly loses money on Wall Street, mostly because the smaller short-term bets he is used to making do not work out for actual trades. He cannot make a trade quickly enough to react to small price movements; there is always a time lag that often causes him to lose money, especially when there is a large movement of the market.

After having lost his first stake, Livingston goes to St. Louis in search of bucket shops that have never heard of him. He make a few thousand dollars before they all throw him out also. After going back to New York, it does not take long for him to lose this money also. Dejected, he goes back to Boston to try and regain his stake and figure out what he is doing wrong. Although he cannot use the bucket shops, he finds some stock exchanges that are a bit unethical. These exchanges normally trick their clients into losing a lot of money, but he knows their games and turns the tables on them.

Livingston goes back to Wall Street and begins to get better at trading. He learns that underlying market conditions and overall direction are more important than the short-term movements of individual stocks. He explains that one should buy on a rising market and sell on a falling market, never trading opposite the general trend on short-term rallies. In addition, he warns against trading in a ranging market and explains how to test the market to determine if a trend has been established.

By following these principles and studying the world financial situation, Livingston makes his first million dollars by going short in a bear market. At times he even works against attempts by traders to rally, because he believes the time is not yet right for the overall market to rally. Eventually, the financial situation gets so dire that there is a general shortage of cash in the banking system and no-one is able to buy stocks. J.P. Morgan assists in loosening up the cash flow and averting a panic, and Livingston does his part by agreeing not to put in any more sell orders. Instead, he begins buying and the stock market begins to rally. This is the point at which he believes he finally understands how the market works.

Livingston then buys a few yachts and goes off on a fishing vacation. Eventually the commodities market catches his eye and he begins to think about trading in cotton. He is well-known at this point, and a famous cotton trader contacts him to see if he wants to go into a partnership. Even though Livingston declines, the cotton trader eventually convinces him to buy when he should be selling. He starts losing a lot of money and ignores his own trading principles, selling commodities that are making a profit and hanging onto those that are losing money, hoping to turn the market around. When he has lost almost all of his money, he further compounds his mistakes by trying to force a profit out of Wall Street to make up for his losses, at a time when the market is not good for making money. In the end he goes flat broke and becomes very ill and disheartened. In the end, he realizes that one's own susceptibility to emotional responses is as important to understand as anything about the market.

Livingston goes through a long, difficult period when he is taken advantage of by one brokerage house only to realize that they are causing him to lose out on opportunities to protect their other clients. This is followed by a period in which the market is not doing anything that would allow a trader to make money and because he is trying anyway, Livingston's debts eventually rise to the level of nearly a million dollars. He declares bankruptcy, which frees him to trade with a clearer mind. He calls in a favor to get a small stake and the market rises sharply due to World War I, allowing him to make enough money to pay off all his previous debts and then some. He does describe how there are some events that cannot be foreseen that can cost a trader money, in his example of a group of coffee traders who go to Congress and get the rules changed in the middle of his trade, making it unprofitable.

Livingston gives some general advice about what he has learned during this period. First he discusses his general rule of not listening to tips even though everyone else seems to be hungry for them. He believes they are mostly used by insiders and stock manipulators to fool the public. One should rely on one's knowledge of general market conditions and trends, as well as information on the specific company. He provides some examples of insider trading and what a great effect it can have on individual stock prices, making a certain stock behave in a way that it should not. He also mentions his "hunches," which are somewhat famous. He does not think they are really anything supernatural, but rather a combination of small signals that an experienced trader would notice without necessarily being conscious of them.

Later in his career, Livingston becomes a stock manipulator or operator. He is paid by a group of insiders or investors to manipulate the price of stock so that he can sell their shares at a good prices, usually a large amount of shares that they could not otherwise dispose of profitably. Livingston first tells some tales of famous manipulators and their coups in the market, and then gives some examples of how he manipulates stock prices on behalf of his customers. He believes the best approach is not to spread rumors of tips, but rather to trade in the market in such a way as to give other traders certain impressions of what is happening with that stock and induce them to buy or sell accordingly.

Based on his career experiences, Livingston reviews some of the activities he believes are unethical and ought to be banned. Prominent among these is the printing of unattributed tips by the press, supposedly coming from high but unnamed sources within a company. Livingston believes that the general public, and even traders, lose a lot of money on these tips, which are really designed to allow insiders to dispose of their own holdings at an inflated price. He also discusses the conflict of interest that brokers have who accept commissions from insiders and then recommend the same stocks to their customers, inducing them to buy at these same inflated prices. Livingston frowns on stock splits and offering stocks on a payment plan. Finally, he closes with his most frequent admonition that to become a successful trader, one should not rely on the tips of others.

More summaries and resources for teaching or studying Reminiscences of a Stock Operator.

Reminiscences of a Stock Operator from BookRags. (c)2022 BookRags, Inc. All rights reserved.