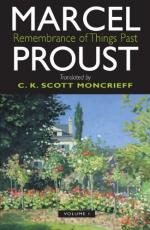 Marcel Proust
This Study Guide consists of approximately 64 pages of chapter summaries, quotes, character analysis, themes, and more - everything you need to sharpen your knowledge of Remembrance of Things Past.

Remembrance of Things Past Summary & Study Guide includes comprehensive information and analysis to help you understand the book. This study guide contains the following sections:

This detailed literature summary also contains Topics for Discussion and a Free Quiz on Remembrance of Things Past by Marcel Proust.

Remembrance of Things Past by Marcel Proust is the story of a young boy's journey through life. It is suggested that the ambiguous, unnamed narrator is partially autobiographical. The narrator experiences several romances, which lead the majority of the action in the novel. Remembrance of Things Past is the biography not just of the narrator, but of the entire social group in which he lives.

The narrator reminisces about his past, starting with his time at Combray. His childhood at Combray is unhappy; his sole comfort is Mamma's good-night kiss. When dinner guests come, he does not receive this kiss. The most frequent visitor is M. Swann, though his visits decrease after his marriage. On one occasion, the narrator is sent to his room before dinner ends, and Mamma rebuffs his attempt to kiss her. He sends a note requesting his mother to come to him, but she returns no response. He decides to wait up for her and meets her in the hallway. He grows afraid when he hears his father's approach, but Father sees that his son is unhappy and sends Mamma to sleep in his room and comfort him. The narrator visits Uncle Adolphe when an actress is visiting. The family disapproves, has an argument with him and never sees Uncle Adolphe again. The narrator reads a lot and ignores real life as much as possible. His friend, Bloch, visits once but is not allowed to return because the narrator's family does not like him. Luckily, he introduces the narrator to Bergotte's writing, which the narrator greatly admires. When the narrator learns the M. Swann's daughter is friends with Bergotte, he longs to befriend her. The narrator's family has avoided Swann's park since his marriage, but one day they take a walk through Swann's garden when the Swanns are supposed to be out of town. A girl appears, followed by a man and woman who call the girl Gilberte. The woman is Mme. Swann; the man is M. de Charlus. The narrator daydreams about meeting and being accepted by the Guermantes. Aunt Leonie dies, and the narrator leaves Combray.

M. Swann meets Odette de Crecy who introduces him to the Verdurin clan. The pianist plays a tune that M. Swann had heard and admired. M. Swann learns that it is called "Vinteuil's sonata", and it becomes M. Swann and Odette's love anthem. They have a long flirtation with no physical relationship until one day, when M. Swann drives Odette home, he arranges her flowers, and they kiss. After that M. Swann visits Odette every night. The Verdurins no longer like M. Swann and prefer Odette's other friend, Forcheville. M. Swann begins to become suspicious of the rumors he hears about Odette and is jealous of every man that comes into contact with her. There are many love games between the two, as M. Swann tries to convince Odette that he does need her or want her as much as she thinks. When he receives an anonymous letter detailing Odette's affairs, M. Swann realizes that their entire relationship has been a lie.

The narrator laments his inability to travel due to his poor health. He goes to Champs-Elysees every day where he encounters Gilberte. He begins to play with her and they become friends. The narrator is obsessed with Gilberte and the Swanns, and he learns that generally everyone disapproves of Swann's marriage, which has affected his social status. The narrator longs to see Berma act but is disappointed when he finally sees her. After the play, he meets M. de Norpois who encourages him to become a writer. The narrator gets sick, and he is not allowed to return to Champs-Elysees when he gets better. Gilberte invites the narrator to her tea parties. He goes to the Swanns' house often after that. At one of Mme. Swann's tea parties, the narrator meets Bergotte. Gilberte is displeased when the narrator visits without her consent and, after an argument, he strives to convince her of his indifference. He finally decides to see her again but only as a lover. On his walk to her house, he sees her in the park with another man and his indifference for her grows.

Two years later, the narrator, Grandmother, and Francoise go to Balbec. At first, the narrator is lonely and his health suffers as a result. Eventually, he enjoys Balbec's beauty. He desires to be pleasing to others at Balbec, but he makes no friends. They run into Grandmother's friend, Mme. de Villeparisis, and they dine together daily. Mme. de Villeparisis' nephew, Robert de Saint-Loup, visits his aunt and becomes friends with the narrator. Saint-Loup tells the narrator about his uncle's early life and introduces the narrator to M. de Charlus when he arrives at Balbec. Saint-Loup and the narrator encounter Bloch on the street one day and are invited to dinner with the Bloch family. Saint-Loup's mistress is disliked and disapproved of by his family and friends.

More summaries and resources for teaching or studying Remembrance of Things Past.

Remembrance of Things Past from BookRags. (c)2022 BookRags, Inc. All rights reserved.