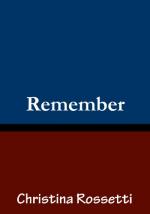 Christina Rossetti
This Study Guide consists of approximately 27 pages of chapter summaries, quotes, character analysis, themes, and more - everything you need to sharpen your knowledge of Remember.

Try writing a Petrarchan sonnet. Remember that there is a general expectation of what the content in the octave and in the sestet should provide, as well as strict meter and rhyme schemes throughout.

Read as much information as you can on Queen Victoria of Great Britain and then write an essay on some of the likely reasons that she was the longest reigning monarch in European history (besides Louis XIV).

The Pre-Raphaelite art movement was a shortlived one, but it paved the way for other "rebellious" styles of painting, sculpting, writing, and so forth. What twentieth-century art movements have also been controversial and considered out of the mainstream? How have they been received by the general public and other artists?

The Industrial Revolution brought swift changes to manufacturing, production, and communication capabilities throughout the world. What do you think was the...

More summaries and resources for teaching or studying Remember.

Remember from Gale. ©2005-2006 Thomson Gale, a part of the Thomson Corporation. All rights reserved.