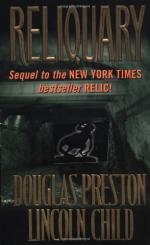 Describe the incident in which the first two bodies are discovered. What is eventually revealed about the way those two bodies wound up in that particular place?

How does Dr. Frock come to be confined to a wheelchair? How does this impact him and his life? Do others realize the depth of his loss? Support your answer.

Margo Green was among those who were impacted by the original "Museum Beast" murders. What impact did that situation have on her as a person? How does it change how she might have acted in the current situation? Why do you think so?