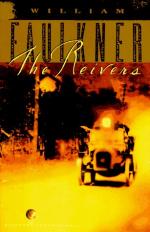 The Reivers Topics for Discussion

William Faulkner
This Study Guide consists of approximately 59 pages of chapter summaries, quotes, character analysis, themes, and more - everything you need to sharpen your knowledge of The Reivers.

One of the primary themes of the novel is the battle between virtue and non-virtue. Using examples from the text, describe at least three actions representing each side of this battle.

Explain how the novel portrays women in the early 1900's.

Compare the personalities of Boon and Ned. What are their similarities and differences?

Give at least five examples of statements or behaviors of characters in the novel that are racist or discriminatory.

Do you think Boon had a right to be jealous of Corrie's connection to Sam in the beginning of the novel? Why or why not?

Knowing that Ned traded the vehicle and entered the horse race in order to save his relative, do you believe Ned acted morally or immorally? Virtuously or non-Virtuously? Explain your answer.

Do the vast descriptions of the history surrounding Jefferson, Mississippi and the Priest family aid...

More summaries and resources for teaching or studying The Reivers.

The Reivers from BookRags. (c)2022 BookRags, Inc. All rights reserved.