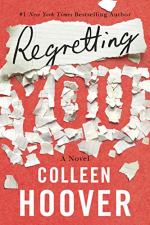 Related Topics
Slammed: A Novel
Maybe Someday
Layla
Verity
It Ends With Us
Ugly Love
November 9
Reminders of Him
All Your Perfects

Colleen Hoover
This Study Guide consists of approximately 64 pages of chapter summaries, quotes, character analysis, themes, and more - everything you need to sharpen your knowledge of Regretting You.

Regretting You Summary & Study Guide includes comprehensive information and analysis to help you understand the book. This study guide contains the following sections:

This detailed literature summary also contains Quotes and a Free Quiz on Regretting You by Colleen Hoover.

The following version of the novel was used to create this study guide: Hoover, Colleen. Regretting You. Montlake, December 10, 2019. Kindle.

In the novel, Regretting You by Colleen Hoover, grief and betrayal collide when a fatal car crash reveals a couple’s extra-marital affair. Despite the pain that Morgan Grant is feeling when she learns Chris, her husband of 17 years, had an affair with her sister, Jenny, Morgan intends to keep her daughter Clara from learning the truth about her father and aunt. The secret becomes more difficult when Jonah, Jenny’s fiancé, realizes that Elijah, the infant he believed he had fathered with Jenny, is more than likely Chris’ son. As Jonah and Morgan struggle through their grief and anger, they are attracted more and more to each other, an attraction that makes Clara believe her mother has been the one cheating on her father with Jonah.

Hoover opens her novel when Chris, Morgan, Jenny, and Jonah are teens. Chris and Morgan are a couple while Jonah is dating Jenny. Morgan feels an attraction toward Jonah that makes her uncomfortable. When Jonah suggests one day to Morgan that they are dating the wrong people, Morgan tells Jonah that she is pregnant with Chris’ baby. Jonah leaves the following day without saying goodbye to any of his friends.

Seventeen years later, Jenny, who has had Jonah’s baby, tells Morgan that she and Jonah are getting married. Morgan and Chris have been married for seventeen years. Their daughter, Clara, is sixteen. Morgan is irritated by Jenny’s announcement and worries that Jonah will abandon her.

The following day, Morgan receives a phone call that Chris has been in a bad wreck. When she arrives at the hospital, she cannot get any of the nurses to give her any information. Morgan calls Jenny, who works in labor and delivery at the same hospital because she hopes Jenny can find something out for her. The supervisor tells Morgan that Jenny is not scheduled to work that day even though Jenny told Morgan it would be her first day back from maternity leave. When Jonah arrives at the emergency room, he tells her that he was informed Jenny had been in a bad car wreck. They first believe there was some mistake, but the nurse confirms both Jenny and Chris were hurt. Jonah calls the police and learns that Chris had been driving Jenny’s car when the crash took place. Both he and Morgan immediately suspect that Jenny and Chris were having an affair, though Morgan asks Jonah not to speak his suspicion out loud. They decide to tell the family that Chris had a flat tire and had gotten a ride to work with Jenny.

The story, which is told in alternating chapters from both Clara and Morgan’s point of view, switches to Clara’s point of view. When Clara learns that both her father and her aunt were killed in a wreck, Clara blames herself for the wreck. She had been texting Jenny about Miller, a boy whom Clara is interested in dating, when the wreck took place. At one point, Jenny had been responding to her texts; then, she stopped responding. Clara does not tell her mother her fear that she caused Jenny to crash because she was distracted.

Because Jenny and Jonah’s baby, Elijah, looks so much like Clara did as a baby, Morgan is the first to conclude that Elijah is possibly Chris’ son. When Jonah sees the resemblance between his son and Chris, he drops Elijah off at Morgan’s house and says he cannot raise him. It is Clara who talks sense into Jonah, making him realize he will regret abandoning Elijah. When Clara arrives home after talking to Jonah and cleaning his house, Morgan demands to know where Clara had been. The relationship between Clara and Morgan has deteriorated since the wreck. Clara tells her mother what she has been doing but knows her mother does not believe her.

Meanwhile, Morgan has begun to realize that she has been attracted to Jonah since they were in high school. Jonah has told her that the reason he left town after she told him she was pregnant was because he feared he would interfere with Morgan's relationship with Chris. He admired them too much to put their relationship at risk. He pushes Morgan to admit that she had feelings for him in high school, feelings that still exist. One day, Jonah kisses Morgan. Clara catches them kissing and believes they have been having an affair all along.

Clara revolts by losing her virginity to Miller at 16 and then refusing to comply with her mother’s rules. On the night of Clara’s 17th birthday, Clara and her best friend get drunk off Morgan’s stash of wine. Clara’s drunkenness makes her more willing to talk, and she admits to her mother that she caused the wreck that killed Jenny and Chris.

The next day, when Clara is sober again, Morgan asks Clara why she thinks the wreck was her fault. Clara says she was texting Jenny when the crash happened. Forgetting her first lie, Morgan tells Clara that Jenny was not driving when she was killed. Clara catches the lie and begins to question other aspects of the crash. She realizes that Jenny and Chris were together not because her father had a flat tire but because they were having an affair. A few minutes later, she realizes that Jonah abandoned Elijah at their house because he suspects that Elijah is Chris’ baby.

Even though Morgan had believed that Clara would be devastated learning that her father and aunt were having an affair, Clara was more accepting of their affair than she had been of what she believed was an affair between her mother and Jonah. Clara realizes that she is harder on her mother because her mother has always dedicated her life to doing what was best for Clara and the family. Even though Clara loved her father and aunt, they did not have that same sort of selflessness. Clara realizes just how mean she has been to her mother when her mother was trying to do what was best for her. They talk through their feelings and insecurities. Clara gives her mother and Jonah her blessing to date.

More summaries and resources for teaching or studying Regretting You.

Regretting You from BookRags. (c)2022 BookRags, Inc. All rights reserved.