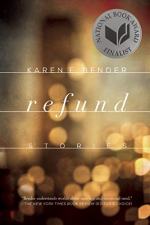 Karen E. Bender
This Study Guide consists of approximately 42 pages of chapter summaries, quotes, character analysis, themes, and more - everything you need to sharpen your knowledge of Refund.

“Refund” is a collection of 13 short stories of literary fiction by Karen E. Bender. In the titular short story “Reunion,” Anna Green attends her twentieth high school reunion where reflects on the past and the present. She runs into her old boyfriend, Warren Vance, who refers to himself in the third-person and has seemingly become very wealthy. Warren cruelly tells Anna she could have had a good life with him. Her own quiet life suddenly seems dull, though she deeply loves her husband and children. Anna and Warren get together and speak several times by phone, with Warren encouraging Anna to invest with him. Anna gives Warren her credit card information to do so, only to discover later on that he is a con man, and has used her card for luxury purposes. Anna has the purchases canceled, and confesses what has happened to her husband. Her husband lovingly helps her to make things right, during which time Anna realizes she is happy with her life.

In “Theft,” the elderly Ginger Klein has been diagnosed with Alzheimer’s. She decides to go on a cruise to kill herself so she can enjoy the rest of her life and so her body is found quickly. She has no one else to take care of her because she has lived her life as a swindler. On board, Ginger meets a 22 year-old girl named Darlene, and the two become friends. Ginger tells Darlene all about her life, and tells Darlene she doesn’t need to worry about changing for her ex-boyfriend, that she should just be herself. Ginger’s mind ultimately goes on the trip, leading Darlene to believe that Ginger made everything up about being a swindler. In “Anything for Money,” Lenny Weiss works as the producer of the TV show “Anything for Money.” Lenny does not have a real relationship with his daughter, so it surprises him when his granddaughter, Aurora, is sent to live with him. Aurora, it turns out, has a weak heart brought on by diseases contracted in third world countries sustained in travels with her mother who leads a reckless lifestyle. Lenny devotes his life to finding a new heart for Aurora, all the while devoting himself to knowing her and making her happy.

In “The Third Child,” Jane Goldman, her husband, and their two children have relocated to South Carolina from New York for financial reasons. Pregnant with a third child, Jane decides to an abortion for financial reasons and because she worries about being mother enough for two children. Her husband is angered that Jane has not consulted him. In “The Loan Officer’s Visit,” Laura Kaufman’s parents come to visit her and her family for the first time in Richmond. Their visit is short and unsettling, because Laura’s parents seem to be aging quickly before her eyes. They do not seem to be the same people she remembers as a child. In “Refund,” Josh and Clarissa sublet their New York apartment to take one month teaching jobs at a college in Virginia for the month of September. Two young women from Montreal, Kim and Darla, take the apartment. Because of the terrorist attacks on 9/11, Kim decides to return to Canada, demanding a full refund. Clarissa disagrees, noting that she can only give a partial refund. Kim counters, saying she deserves more money for everything she has experienced. Clarissa ultimately learns that Darla was killed in the Twin Towers, having been urged by Kim to meet her there.

In “This Cat,” the unnamed narrator purchases a black cat for her children. At the same time, the narrator undergoes testing for breast cancer. The cat suddenly dies one morning from a disease no one knew the cat had. The narrator sees herself in the cat, and notes that she wants the cat back. She and her family have a funeral for the cat, during which time the phone rings with test results. In “A Chick From My Dream Life,” Sally wishes she could be confident like her sister, Betty, who has a missing hand. Through the summer, Sally works up the courage to talk to boys as she notes her father is becoming more and more withdrawn. In “Candidate,” the liberal Diane Bernstein learns she and conservative Republican candidate Woody Wilson have more in common than she suspected. She also comes to view him not as some heartless politician opposed to gay marriage, but a complex human being who is more than meets the eye. In “The Sea Turtle Hospital,” a teaching assistant brings a student to a sea turtle hospital to see people doing good things after she and the student survive a school shooting.

In “Free Lunch,” Donna and her family, newly arrived to New Brunswick, North Carolina, are invited to lunch with the local Rabbi’s family. The rabbi’s wife believes God has brought Donna and her family to North Carolina, but Donna does not believe so. In “For What Purpose?”, TSA agent Sally befriends and develops a crush on a man named John Comet. Sally is later saddened to learn that she is going to be laid off due to budget cutbacks, and is horrified to see John apprehended by the TSA for trying to travel with his beetle collection. In “What the Cat Said,” a married couple’s cat says “I love you” twice. The couple debate to whom the cat was speaking. The cat cuddles up with the husband, snaps at the wife, then jumps off the bed.

More summaries and resources for teaching or studying Refund: Stories.