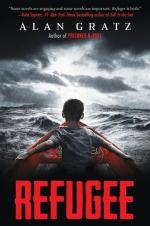 Gratz, Alan
This Study Guide consists of approximately 70 pages of chapter summaries, quotes, character analysis, themes, and more - everything you need to sharpen your knowledge of Refugee.

Pages 1 - 33 starts with Josef as his family’s home is invaded in Berlin, Germany in 1938. It is the night of Kristallnacht and his father is arrested and sent to a concentration camp. After 6 months he is allowed to leave but only if he leaves Germany immediately, so they purchase passage on a ship to Cuba. Isabel, living in Havana 1994, watches a riot unfold. She watches her father get beaten, realizing her family has to leave Cuba immediately. Mahmoud is introduced on page 12, in Aleppo Syria 2015. One day while doing his homework, a missile explodes in his home, tearing out the outer wall of his family’s apartment.

During pages 34 - 73, Josef and his family meet his father at the ship, but he is thin and very paranoid. The family boards the ship to Cuba and feels safe. Meanwhile, Isabel and her family decide they must leave Cuba that night. They join their neighbors on a homemade boat and push off from Cuba into the ocean towards Miami, with the police shooting after them. Mahmoud and his family make it out of their collapsing apartment building alive, and their father puts them in a car, headed to Turkey. Later, bullets tear into the car, forcing them to abandon it.

In pages 74 - 109, Josef has his bar mitzvah. He also learns that the ship is moving as fast as possible to beat the other ships headed to Cuba. He and the other children of the ship take a tour, and hear the crew singing the Nazi anthem and discussing spilling Jewish blood. Isabel is still on the boat headed to Miami but the motor stops. The family tries to fix it, but soon they face a large tanker barreling towards them. Mahmoud and his family make it to Turkey and are granted temporary visas. They make it to the coast of Turkey next to Greece and try to take a boat to cross the Mediterranean, but are told to come back the next day. They find an abandoned mall to sleep in.

In pages 110 - 163, Josef attends a funeral with his father. The ship arrives outside Cuba but puts down anchor kilometers away. They ask the police when they will be let off but the police keep saying manana. After a few days, one of the stewards ransacks their cabin out of spite. Isabel and her family finally get the boat started, but Ivan’s father falls out. Isabel dives into save him, as it starts raining and the boat is filling with water. Mahmoud and his family keep coming back to the smuggler but are repeatedly told to come back tomorrow. Finally they return one night and board an inflatable raft. It is stormy, and the raft crashes into rocks and pops. The family all falls out into the water, and Mahmoud’s mother surrenders his sister Hana to a passing boat so she can stay afloat while they wait for help.

In pages 164 - 215, Josef’s father jumps overboard but a police officer saves him. The officer comes on board and everyone thanks him but he still says they will leave manana. Isabel accidentally lands in the Bahamas, but they are forced to turn around. Her mother begins to go into early labor on the boat. Ivan is attacked by a shark and dies. Mahmoud and his mother struggle to survive in the Mediterranean but eventually the family is rescued by the Greek Coast Guard. They get to Lesbos and search for Hana, but do not find her. They go to Athens and decide to escape by crossing into Macedonia.

In pages 216 - 269, the MS St. Louis is refused harbor in Cuba. They attempt to land in the U.S., but are turned away from the U.S. government, and must to return to Europe. Josef helps a mutiny on board, but they are thwarted by the Captain. The Captain promises he will try to get them into England. Isabel and her family see the lights of Miami, but the boat starts to fall apart. Then the Coast Guard finds them, while her mother goes into labor. Mahmoud crosses Macedonia, and takes a taxi to Serbia until they are held at gunpoint. They walk to Hungary and there the family is arrested and imprisoned at the border.

In the last section, pages 270 - 317, Josef and his family are given refuge in France. But soon the Nazis have invaded and they are back on the run. The Nazis force Josef’s mother to choose which of her children to save. Isabel is chased down by the Coast Guard but her grandfather jumps in to distract them, knowing he will be sent back to Cuba. Meanwhile, her mother gives birth as they paddle to shore. Her story ends with her in school, playing a trumpet. Mahmoud walks out of the Hungarian prison with his family and other refugees, and marches to Austria. From Austria they finally get to Germany where they are given asylum. They stay in the home of an older Jewish German couple, and the woman turns out to be Ruthie Landau, Josef’s sister. She tells Mahmoud how Josef had offered himself to be taken, and she had survived the war. The novel ends with Mahmoud feeling at home.

After the story ends, Gratz includes three maps of each character's travels, as well as an author’s note that tells the backstory for each of the characters.