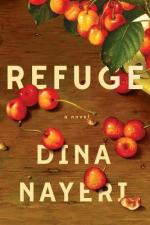 Nayeri, Dina
This Study Guide consists of approximately 71 pages of chapter summaries, quotes, character analysis, themes, and more - everything you need to sharpen your knowledge of Refuge.

This detailed literature summary also contains Quotes and a Free Quiz on Refuge by Nayeri, Dina.

The following version of this book was used to create this study guide: Nayert, Dina. Refuge. New York: Riverhead Books, 2017.

The first chapter titled “Dr. Hamidi’s Difficult Divorce” begins with the father, Bahman Hamidi sitting in Iranian divorce court and watching a parade of relationships crumble, as husbands and wives beg the judge either for a divorce or against one. Bahman is there to ask for a divorce from his third wife Sanaz. The second chapter is titled “Me and Baba and Ardestoon” and told from Niloo’s perspective as she remembers her childhood growing up in Iran, and her mother’s decision to flee. The third chapter, “The Other Dr. Hamidi”, shifts to Amsterdam in August 2009 from Niloo’s third-person perspective. She and her husband Gui host a colleague for dinner, but she is late and unprepared, angering her husband. Afterwards they shop for food and her credit card is declined and her demand to figure out the problem rather than use his card causes another fight.

The fourth and fifth chapters are titled “The Village Crumbles” and “Erotic Republic.” Bahman is still in the divorce court while pleading his case for divorce to the judge, his current wife Sanaz bursts in claiming he is a liar, and a believer in the Revolutionary Green Movement. Bahman realizes he needs to leave the country. The next chapter changes back to Niloo’s perspective in Amsterdam, as she attends an event at a local Iranian arts space called Zakhmeh. She tells a story in front of the crowd, and makes friends with a refugee named Mam’mad. When she comes home Gui has waited up for her, and they promise to try not to fight anymore.

The sixth chapter, “The First Visit”, takes place in Oklahoma, 1993. Baba has flown in from Iran to visit their mother and the teenage Niloo and Kian. Baba takes the children to water parks and indulges in American food and activities. Niloo finds him in his motel slumped over in an opium stupor and runs away in fear. The following two chapters, “House Arrest” and “The Hospitality of the Dutch” revert to Baba’s perspective and Niloo’s respectively (121, 143). Baba is sentenced to house arrest, but the judge also permits his second wife Fatimeh to stay in the house as well. Baba starts going through opium withdrawal. In the eighth chapter, Niloo meets a refugee named Karim whom she agrees to help. She and Gui go to Zakhmeh together where Mam’mad gets in a fight with Siavish over his stalled paperwork.

“The Second Visit” details the trip Kian and Niloo take with Baba in London in 2001. Baba has aged, and Kian is moody and cruel. The plane hits the two towers in New York during their visit on September 11 (167). In “A New-Year World” Baba continues to go through withdrawal. He meets Donya Norouzi (whose name translates to A New-Year World) from the first chapter in his dental practice and gives her money. In “An Addict in Dam Square”, Niloo receives a spice jar containing a letter from her father she does not open (205). She continually fights with Gui. Her friend Mam’mad from the squat sets himself on fire out of anger and protest of his denial of asylum in Amsterdam.

“The Third Visit” explores the family’s trip to Madrid, in 2006. Baba’s heart stops from almost overdosing on Aderall to stave off opium withdrawal, which upsets the family. “Family Formations Among Early Primates” returns to Niloo’s perspective in Amsterdam in October 2009 where she is still in grief over Mam’mad’s death. She realizes Gui has thrown out her precious spice jar, picks a fight with him, and Gui leaves. She tells him she wants a divorce. Niloo also opens the letter from her father, realizing he has been under house arrest. “Small Joys, Like Sour Cherries” details Baba’s trip to Istanbul in August - October 2009, where he obtains a tourist visa to Holland, where he plans to defect.

“The Fourth Visit” tells the story of Baba’s visit to Istanbul with Kian and Niloo in 2008. They go to restaurants and events in Istanbul, though Niloo is unnerved by how frail her father seems, and thinks this is the last time she will see him. The subsequent chapter “Just like your Baba” changes to Niloo’s perspective in October 2009 in Amsterdam after she has moved out of her shared apartment with Gui and into their other unfinished apartment. She finally opens the letter from the spice jar, and realizes her father has been under house arrest. Her mother flies to Amsterdam, calling and telling her Baba is trying to escape Iran, and the chapter ends with Baba talking to Siavish outside Niloo’s apartment in Amsterdam, and knocking on her door. The final chapter, “Village Building”, changes to Baba’s perspective as he sits with Pari and Niloo in the unfinished apartment eating and catching up on Niloo’s life. They are worried about their daughter’s divorce, and Baba has many questions for Niloo, but he is momentarily at peace because - and this is the last line of the novel - “They were a village” (320).

More summaries and resources for teaching or studying Refuge.