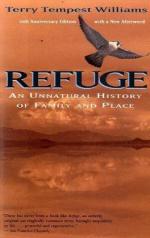 Related Topics
When Women Were Birds

Terry Tempest Williams
This Study Guide consists of approximately 25 pages of chapter summaries, quotes, character analysis, themes, and more - everything you need to sharpen your knowledge of Refuge.

Refuge: An Unnatural History of Family and Place Summary & Study Guide includes comprehensive information and analysis to help you understand the book. This study guide contains the following sections:

This detailed literature summary also contains Topics for Discussion and a Free Quiz on Refuge: An Unnatural History of Family and Place by Terry Tempest Williams.

"Refuge: An Unnatural History of Family and Place" by Terry Tempest Williams is a work of non-fiction that follows the personal family trauma of the author in addition to the evolution of the Great Salt Lake and the birds that call the Bear River Migratory Bird Refuge their home. The Bear River Migratory Bird Refuge is aptly named as it sits at the point where the Bear River flows into the northeast sector of the Great Salt Lake. The Refuge serves many purposes, including the protection of the marshes around the Bear River, particularly those located at the mouth of the river. The Great Salt Lake ecosystem depends upon the marshes, which are the largest freshwater component of the system. Because the marshes are surrounded by desert, waterfowl routinely flock to the area which they see as an oasis.

In the context of the book, the Bear River Migratory Bird Refuge is a place of fascination and wonder to the author, Terry Tempest Williams.

The themes contained in the book are many. The Bird Refuge, the Great Salt Lake, and cancer are the main topics. Many members of the Tempest family have suffered with or died from cancer. The author uses the cycles of nature as a metaphor for her relationship with her mother who, after four years, dies from ovarian cancer.

Williams believes that extensive nuclear testing in the Nevada desert has been responsible for the extremely high number of incidents involving cancer that have plagued her family. In "Refuge: An Unnatural History of Family and Place" Williams addresses various environmental issues in addition to stories about her mother's battle with ovarian cancer. Williams has testified that she believes that the nuclear testing in the 1950s and 1960s is responsible for the nine mastectomies and seven deaths suffered by various members of the Tempest family.

Another main theme in the book is family relationships. The relationships in the Tempest family are highlighted, particularly those between Terry, Diane, and Mimi. Mimi is a strong matriarch who seems to defy the typical mother-in-law stereotype when it comes to Diane. The women obviously love each other and each brings a special level of influence to the author.

Williams is able to use nature as a metaphor for Diane's illness, from the first bout with breast cancer, through remission and finally, the journey through ovarian cancer and death. Terry becomes much more than a daughter, providing every type of assistance to Diane, particularly spiritual. The women learn from each other up to the very end.

The author has managed to turn one of life's greatest trials into a spiritual journey that honors her mother, grandmother, nature, and herself.

More summaries and resources for teaching or studying Refuge: An Unnatural History of Family and Place.

Refuge: An Unnatural History of Family and Place from BookRags. (c)2022 BookRags, Inc. All rights reserved.