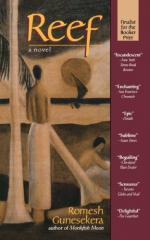 Romesh Gunesekera
This Study Guide consists of approximately 32 pages of chapter summaries, quotes, character analysis, themes, and more - everything you need to sharpen your knowledge of Reef.

This detailed literature summary also contains Topics for Discussion and a Free Quiz on Reef by Romesh Gunesekera.

Romesh Gunesekera's Reef begins with the story's narrator, Triton, filling up his tank at a petrol station in England. When he goes to pay, he notices that the cashier is someone who looks like him. In answer to his inquiry, the cashier confirms that he is indeed from Sri Lanka. The cashier is a new refugee, but the narrator has been in the country for twenty years and is the owner of a restaurant. Talking together about their country and the war there makes the narrator start thinking of his life in Sri Lanka and of the events that brought him to England as a refugee.

Triton begins his recollections from 1962, when he was a boy of eleven. That year, he was taken by his uncle to work as a houseboy for Mister Salgado, a marine biologist. His first year at the bay-fronted house was tough because he was under the supervision of Joseph, Mister Salgado's servant. Triton describes Joseph as deceitful, mean-spirited, and jealous of him. One weekend, after Mister Salgado had gone away for a short stay on a tea-estate, Triton found Joseph in Mister Salgado's room rubbing his employer's cologne on his chest. In anger, Joseph assaulted the boy, then left the house and stayed out all night. Mister Salgado returned to find Joseph still out. When the servant returned drunk, Mister Salgado fired him immediately and gave Triton full responsibility for the housekeeping.

Triton grew and learned to be a good housekeeper. He also educated himself by reading a neighbor's schoolbooks whenever he had the chance. When old Lucy-amma, the cook-woman, retired, Triton took over all the cooking as well, and became an accomplished chef.

One day, a woman came to the house to have tea with Mister Salgado. It was the first of many visits, and the beginning of a romance between the two. Triton liked Miss Nili and felt that she made their house better with her presence. Mister Salgado, who had never celebrated any festivals or holidays before, had a Christmas Eve dinner party for Nili and their friends (mostly her crowd). Triton's turkey was a great success, as was the party. A few days later, Nili moved into the house with Mister Salgado, much to Triton's joy. The arrival of Miss Nili was, for them, "the beginning of a new era." She brought out profound changes in Mister Salgado, who now smiled more and grew both softer and stronger. The big changes in the house coincided with even bigger changes in their nation: "The rest of the country, sliding into unparalleled debt, girded itself for change of a completely different order: a savage brutalizing whereby our chandiyas-our braggarts-would become thugs, our dissolutes turn into mercenaries and our leaders excel as small-time megalomaniacs" (pg. 118).

On a visit with to the bungalow ocean observatory, with Nili and Mister Salgado, Triton learned that even Mister Salgado's once mild assistant, Wijetunga, had been directly influenced by what was happening: "You know brother," he told Triton, "our country really needs to be cleansed, radically. There is no alternative. We have to destroy in order to create" (pg. 121).

Wijetunga was expressing a sentiment that was spreading rapidly among the dissatisfied masses. Mister Salgado, Nili and their friends were not a part of that group. They were well-educated, wealthy socialites, and were often cynical of the revolutionaries-criticizing them as thugs and misguided Marxists. It wasn't until a popular millionaire was killed that shockwaves went through the whole society.

The relationship between Mister Salgado and Nili eventually ended when Mister Salgado went into a jealous rage over Nili's liaison with an American friend. She, in turn, insulted him and walked out of his life. As Mister Salgado's life fell into turmoil, so did the island nation. The revolutionaries won the General Election by a landslide, and the socialites' way of life changed drastically. Many of them began to leave the country.

Mister Salgado and Triton soon moved to London. There, they moved from place to place until, five years after their arrival, Mister Salgado decided it was time to buy a permanent home; the chaos was only getting worse in Sri Lanka as the years went by. Triton thought they should open a restaurant, and Mister Salgado eventually bought him an old snack-bar to start him on the path to making his dream come true.

In 1983, there was another major uprising, but news of Nili's mental breakdown sent Mister Salgado back to find her. Triton stayed in London, realizing that deep down he had always wanted to be on his own. Without Mister Salgado by his side, he was finally free to pursue success as a restaurateur and find his own place in the world.

More summaries and resources for teaching or studying Reef.