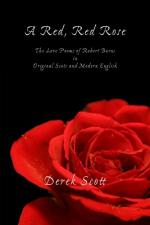 Robert Burns
This Study Guide consists of approximately 27 pages of chapter summaries, quotes, character analysis, themes, and more - everything you need to sharpen your knowledge of A Red, Red Rose.

After the 1786 publication of Poems, Chiefly in the Scottish Dialect, Robert Burns spent the last ten years of his life collecting and editing songs for The Scots Musical Museum, an anthology intended to preserve traditional Scottish lyrical forms. During this time, Burns also composed more than three hundred original works for the volume, songs that relied heavily on forms and sentiments popular in the folk culture of the Scottish peasantry. "A Red, Red Rose," first published in 1794 in A Selection of Scots Songs, edited by Peter Urbani, is one such song. Written in ballad stanzas, the verseread today as a poempieces together conventional ideas and images of love in a way that transcends the "low" or non-literary sources from which the poem is drawn. In it, the speaker compares his love first with a blooming rose in spring and then with a melody "sweetly play'd in tune." If these similes seem the typical fodder for love-song lyricists, the second and third stanzas introduce the subtler and more complex implications of time. In trying to quantify his feelingsand in searching for the perfect metaphor to describe the "eternal" nature of his lovethe speaker inevitably comes up against love's greatest limitation, "the sands o' life." This image of the hour-glass forces the reader to reassess of the poem's first and loveliest image: A "red, red rose" is itself an object of an hour, "newly sprung" only "in June" and afterward subject to the decay of time. This treatment of time and beauty predicts the work of the later Romantic poets, who took Burns's work as an important influence.

More summaries and resources for teaching or studying A Red, Red Rose.

A Red, Red Rose from Gale. ©2005-2006 Thomson Gale, a part of the Thomson Corporation. All rights reserved.