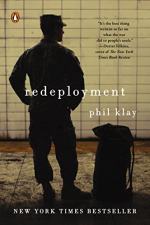 Phil Klay
This Study Guide consists of approximately 48 pages of chapter summaries, quotes, character analysis, themes, and more - everything you need to sharpen your knowledge of Redeployment.

This detailed literature summary also contains Quotes and a Free Quiz on Redeployment by Phil Klay.

“Redeployment” by Phil Klay is a series of twelve short stories all of which involved the Iraq War which was launched with the U.S. invasion in 2003. There is also one story that takes place in Afghanistan around the same time period. Although the stories are told by different characters – sometimes unnamed -- in different roles, the specter of fear and anger and doubt and often an awe and astonishment of the absurdity of where they find themselves comes across loud and clear.

Klay has drawn on his own experience and those of close family and friends who went to war in Iraq. Klay is careful, as evidenced by the vast resources he used as references, to depict these fictional events with pinpoint accuracy. He has gone to great lengths to write these stories in an authentic way that is largely free of demagoguery. Demagoguery would demand exaggeration and even hyperbole. Neither is necessary; the facts are jarring enough to get the attention of the reader.

There are undoubtedly some problem areas of the war and some specific situations that are not included in these stories by Phil Klay. However, the author touches on the demands and horrors of war in a dozen fictional tales that are eerily realistic and that feature the agony of defeat and the agony of victory. The subplot of this story is the transition the Marines must make when they return home. They struggle with misunderstandings and misconceptions from the home front and fight off the demons that still dance in their heads from the tour of duty.

“Bodies” is told by a Marine who is a member of the Mortuary Affairs unit at a Navy base in Iraq. The “affairs” part of the unit’s title translates to the macabre duty of collecting dead bodies. The unit only collects the corpses of U.S. military. The Iraqis are responsible for their own “clean-up.” When he returns to the states, he doesn’t tell anyone he was in Iraq. For those who know he had served, he doesn’t tell them what he did, or if he does he exaggerates and makes it more horrific than it was – if that was possible.

In “OIF” the author purposely uses many military acronyms to put the reader there. A Marine who receives the Purple Heart and other awards for bravery places them on his mantel back at home. He’d rather his fallen friends were still around. The medals don’t erase the horrors and the fact that many peers had died and he’s still alive.

In “Prayer in the Furnace” PFC Rodriguez is obsessed with whether stopping someone from being killed is as big a sin as murdering someone. He takes his problem to a priest who does his best to assuage the Marine’s worries. The priest tells him that the cross had been a mechanism of torture at one time and that, “In this world, He only promises that we don’t suffer alone.” Rodriguez already knew that. On top of the dangers of a war zone, one story is devoted to the inherent bureaucratic red tape that exists in a major conflict which men and women fighting for their country and their very lives should never have to deal with.

The trauma of injury, physical, emotional and mental, looms ever-present in the stories. The war is truly a life-and-death experience. Here today and gone tomorrow is not just a throwaway slogan in Iraq.

More summaries and resources for teaching or studying Redeployment.