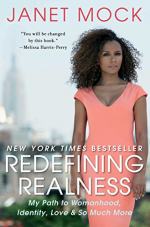 Mock, Janet
This Study Guide consists of approximately 42 pages of chapter summaries, quotes, character analysis, themes, and more - everything you need to sharpen your knowledge of Redefining Realness.

This memoir is set at the turn of the 21st century, opening with Mock’s childhood in the ‘90s in Honolulu, Hawaii, then Oakland and Dallas, and back to Hawaii, closing with her epilogue in New York City in 2009. As a woman of native Hawaiian and black descent, Mock is the target of racial discrimination and growing up, she struggles to see herself represented in American popular culture.

During Mock’s early years in Hawaii, she lives with her grandmother in public housing in Kalihi, Oahu. After spending five years with her father on mainland America, Mock returns to Hawaii in 1995 and lives in a series of houses and apartments with her mother. She has fond memories of time spent at the Kalihi-Palama library, where she indulged her love of literature. Mock challenges people’s stereotypes of Hawaii as a colorful and sunny...

More summaries and resources for teaching or studying Redefining Realness.